It’s all gone a bit sci-fi today. I have a German-language one from Switzerland called Cargo that I’m looking forward to for later in the week, but for now you’ll have to settle for one that was just made by a German.

Two astronauts – Corporal Bower and Lieutenant Payton – awake from hypersleep on a darkened spaceship. Neither of them seems to remember anything, and they appear to be alone. While Payton stays behind to try to access the bridge, Bower tries to make his way to the ship’s reactor to get the power going, and search for anyone else that may be alive on board. Bad shit ensues.

The first time I heard about this film was with the release of the first teaser one-sheet; a truly unsettling image that looked like it belonged in a Tool video instead of on a bus stop*. It was a great poster, but of course it didn’t last. Actually, thinking back on it, the change from a series of fantastic posters to the dull, generic, floating head thing you see above was one of the main reasons why I didn’t go to see this at the cinema when it was first released. I can be very petty that way.

See what I mean? (Surprisingly, this isn’t Steven Tyler)

Due to its similar aesthetic and the shared lineage in producers Jeremy Bolt and Paul W.S. Anderson, Pandorum was always destined to be compared to Event Horizon. This is unfair though, as besides the murky visuals and the nasty business in outer space angle, the two don’t really share anything plotwise. Pandorum looks at the concepts of Hell and redemption subtextually and thematically but it remains true science fiction, while Event Horizon was full-on supernatural horror. It was a haunted house movie that just happened to be in space. They both have their strengths and they both have their weaknesses, but beyond that surface level Pandorum is more like Red Dwarf than anything else. [Yarrrgh! Highlight the next part if you want to read it – Cap’n Spoiler] I’m serious here. Go with me on this one: Bower is Lister, waking up from stasis after the annihilation of Earth. Payton is Rimmer, the annoying one who isn’t as smart as he thinks he is (now I’m picturing Dennis Quaid doing this). The Hunters are Cat, evolved from what was left in the cargo hold. Except in this case, they evolved from the other passengers instead of a pet moggy. They went increasingly feral from one generation to the next instead of the other way around. Actually, think of them as more like the Reavers from Firefly/Serenity. Now tell me, am I wrong? 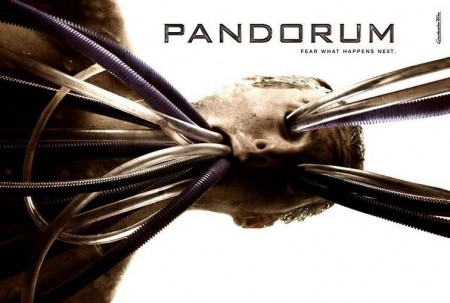 More amazing posterage. Why did they pussy out and go for the boring shit?!

So what did I think? I liked it. As I indicated above, the story is not exactly new, but it is executed with gusto by director and co-writer Christian Alvart, with a big assist from Ben Foster as Bower. Dennis Quaid starts off phoning in his turn as Payton but he gets a bit more invested towards the big climax. In fairness, after Bower and Payton separate at the twenty minute mark, he’s mostly just sitting around talking on the radio. German actress Antje Traue is remarkably badass for a geneticist. You can tell Anderson probably had some input into her character. In fact, if he had directed the flick, she would probably have been the main hero, and quite possibly been played by his dear lady wife Milla. The characters were a bit stale though, and the final twist felt unearned. The execution of it was handled pretty well but it seemed to come out of nowhere. I’m not asking for it to have been telegraphed, but just a touch more foreshadowing would have been better.

I loved the ship. The Elysium is just a gorgeous piece of work from production designer Richard Bridgland. Again, with a movie like this it is hard to come up with something completely fresh and the Elysium does have echoes of the Nostromo and the Event Horizon and any number of other dirty old spaceships but that doesn’t detract from the quality of what the art department at Babelsberg put together. I like how everything is so tactile and icky as well. Stan Winston’s crew designed the Hunters, and they are effective if again a bit derivative. 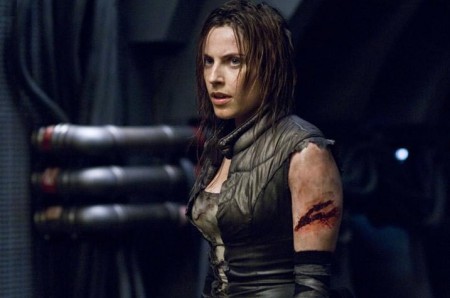 The best science fiction always uses the trappings of the genre to say something about the modern condition, or to reflect on the issues of the day. This is no exception. In fact, the allusions and allegory in Pandorum are actually quite high-falutin’. Whether they are successful or not is something for you to decide for yourself. I would like to write more about that aspect, but I’m wary of giving too much away. Also, it’s getting late and I would want to watch the film a few more times to really get a handle on it all. Maybe I’ll come back to that some other time.

I think this flick was unfairly maligned on release because it has Paul Anderson’s name attached. I said back in my review of Resident Evil: Apocalypse that Anderson has become a bit of a whipping boy among some critics and commenters, particularly in the online community. Personally I don’t give a shit if his name is on a flick or not. I’ll still watch it and judge it on its own merits. Some of what he has produced is less than stellar, but the man is hardly the purveyor of shit that some would attest. I think Pandorum is flawed but well-intentioned, and worth your time.

*After watching the film, it is also an excellent representation of what Pandorum itself actually refers to. I’ll leave it to you to work that out if you haven’t seen it.