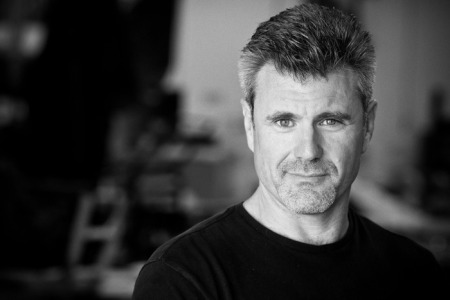 Mention the names Alec Gillis or Tom Woodruff, Jr. to a certain breed of film fan and you’ll see them get that look in their eyes. That faraway look. The one where they aren’t with you anymore, they are back watching Tremors or Aliens or Starship Troopers for the first time, and maybe even popping a bit of a stiffy.

For the rest of you ingrates, Gillis and Woodruff are former protégés of the legendary Stan Winston, who went on to found their own special effects company, Amalgamated Dynamics, Inc., and have been responsible for many of the best practical effects in film and television in the last thirty years. Even in films that weren’t quite so high quality as others (looking at you, Zookeeper) the work these guys do is always top notch.

As well as being an effects specialist Alec Gillis is also a filmmaker in his own right, and has made quite a few shorts over the years including—according to IMDb anyway—the curious prospect that is Mattress of Solitude, starring Gillis himself as Superman and Woodruff as Batman. I’ve already checked; it’s not on YouTube. In the wake of some recent high-profile Kickstarter successes, he has taken to the crowdfunding platform to help produce his first feature as writer-director.

Rubber on the high seas.

The film is Harbinger Down, and it is the story of a group of grad students who have booked passage on the fishing trawler Harbinger to study the effects of global warming on a pod of Orcas in the Bering Sea. When the ship’s crew dredges up a recently thawed piece of old Soviet space wreckage, things get downright deadly. It seems that the Russians experimented with tardigrades, tiny resilient animals able to withstand the extremes of space radiation. The creatures survived, but not without mutation. Now the crew is exposed to aggressively mutating organisms. And after being locked in ice for 3 decades, the creatures aren’t about to give up the warmth of human companionship.

A nice wig should cover that right up. (ADI concept art by Mike Broom and Alec Gillis)

As it might be becoming clear, the movie will be a deliberate homage to the golden age of practical effects. The idea started coming together during downtime on the 2011 remake/prequel to John Carpenter’s The Thing. As Gillis puts it:

What made [Carpenter’s] The Thing great? Something about those movies from the eighties that had a quality that today’s movies don’t have. So rather than recreate or make a sequel, why don’t we take some of those ideas and make a movie that is in the vein of those movies? That respects those movies but is not the same as those movies. It is a contemporary film but it should feel like it is a descendant of those great movies.

Tom Woodruff, Jr. is set to produce the flick, and with over 60 years combined experience in the industry, and their own Oscar-calibre creature shop ready and waiting, Harbinger Down promises to capture that gloriously tactile feeling you only get from having a real monster on the screen. But for that promise to be fulfilled, they need the help of the fans who dig this type of filmmaking.

What I love about crowdfunding is that it’s democratic. If I put Harbinger Down up on Kickstarter and say “here’s what we want to do”, and I lay it all out, then the fans can vote on it and they vote with their pledges. And if we don’t get funded, the fans have spoken: they don’t want it for whatever reason. If we get funded then that’s a vote of confidence and that’s thrilling to me … It’s an opportunity for me to simply take my directives from the fans. If the fans say “here is the money, we trust you” then that gives me the freedom to succeed … I’m pretty confident that we’re going to get funded, to me it’s a matter of to what level we’re going to get funded.

While Gillis acknowledges that digital techniques are a fixture on the movie-making landscape (and often a welcome one), he is fighting back at the way the big studios are promoting digital effects and copious CG as the only way of doing things. While the plan is to integrate some digital effects into Harbinger Down – adding breath vapour and compositing matte paintings for example – it is vital to his mission that there be no digitally animated creatures in the movie. Every monster that appears on screen will be a live effect, either an on-set animatronic or prosthetic, or a miniature.

You can’t do The Avengers for example without a heavy digital component but those aren’t the stories I want to tell. I don’t want to tell stories that have legions of digital characters battling each other on open fields. I want to do stories about people. About individuals being affected by whatever the fantastical, horror or science fiction aspect is.

Who ordered the squid? (ADI concept art by Paul Komoda)

Even Lance can’t save you.

As well as ADI’s own regular crew of wizards and weirdos, Gillis and Woodruff have brought in some old friends from the days working under B-movie titan Roger Corman in the late seventies/early eighties to help out. As of this week, the team for Harbinger Down also includes two-time Oscar winner (for Aliens and Terminator 2) and King of the Miniatures, Robert Skotak; his brother—and fellow owner of a little golden baldy-man—Dennis, and Academy Award nominated VFX superviser Pat McClung. Also committed to the project is genre legend Lance Henriksen, who has been a friend since Alec ripped him in half for James Cameron back in 1985.

Roger Corman had a formula. He was making low-budget movies and he was bringing in people with unbridled enthusiasm and letting them run, and that’s what I loved about those experiences. I wish I could get back to that. I could make low-budget horror movies for the rest of my life. There is so much that can be done. I like the limitations of the smaller films. You can’t solve your problems by throwing money at them because there’s no money to throw. You have to be clever, you have to be creative. You have to be collaborative, and that’s what I’m looking forward to doing.

So with this crew of Expendables, or FX-pendables (see what I did there?) behind him, Gillis is out to prove to the big guns that hold the studio purse-strings that practical creature effects are still a financially and artistically viable way to scare the crap out of audiences. And if everyone who reads this between now and June 7th could join me in pledging, he’ll make his goal with room to spare. And as well as all the groovy rewards that are a necessary part of the Kickstarter experience (and they are very groovy) when the movie comes out you’ll be able to say “I did that”. All you need to do is point your way here.

The reason we started this stuff was not because we thought we could make money on it but because we love to do it. If the opportunity to do what you love is dissipating I think you owe it to yourself and to the fans of that technique to step up and try to make something happen.

To hear Alec talk more about the project, as well as his biggest influences throughout his career and getting up at 3 in the morning to see a boob (in the days before VCRs), you can listen to the full interview below.

On a personal note, in the years that I’ve been running this site and going to festivals I have met and spoken to quite a few noted filmmakers, but this is the closest I have come yet to having a full fanboy wig-out moment. This guy built the Graboid, for fuck’s sake! And the Alien Queen! Frankly I’m amazed I kept it together long enough to finish this conversation. Apologies for the sound quality as well. I was recording this from the speakerphone straight to my laptop mic. Maybe I should do a Kickstarter to get some decent audio equipment…