And we’re back! You know, it seems you can have too much of a good thing. My plan to watch the complete run (to date) of The Walking Dead in a month, twice, turns out to have been a bit ambitious. Owing to a minor case of zombie fatigue, I took a break to rewatch all five seasons of Leverage. Because taking a break from one show to go watch 77 episodes of another show in two weeks is entirely normal behaviour.

So, the last time we saw Rick and the Gang, they were driving away from a (rather shoddy, let’s be honest) CG explosion that took out the CDC headquarters in Atlanta, along with Dr Jenner and Jacqui. Season 2 picks up just a couple of days later. Won’t you join me?

Just a quick reminder of the rules, in case anyone missed it last time. I am only counting kills that can be definitively linked to a specific character. Also, walkers count as a murder weapon, meaning that if someone were to, hypothetically, shoot a guy in the leg and leave him for walker chow, the triggerman gets the point. But something like that’s never gonna happen…

And for the cheap seats, remember: spoilers.

Episode 1 – What Lies Ahead

I’ll tell you what lies ahead: dead people. And a lot of them are walking. Hey, do you think that’s where they got the name…?

Our rapidly diminishing ragtag band of misfits get stuck in traffic and Carol’s suspiciously-aged daughter Sophia decides to do a runner, leading Daryl on a wild goose chase and Rick, Shane and Carl on a wild deer chase and a cliff-hanger ending.

(As before, all counts are walkers unless specified otherwise)

Coming this year… CSI Countryside. “What’s the time of death, Daryl?” “About five minutes and three months ago.” YEEEEEAAAAAAHHHHHHHHHH!

Rick ferries a critical Carl to a farmhouse near the highway where we meet the reserved but decent Hershel and his family. Meanwhile, back in the woods, Daryl continues his search for Sophia. Anyone got odds on how long it’ll take to find her? The cameraman seems awfully fond of that barn, doesn’t he?

Scores: Daryl – 1 (with a frankly rather awesome assist from Hershel’s eldest daughter Maggie with her horseback bat attack).

Episode 3 – Save the Last One

A remorseful Otis leads Shane on a supply run to a FEMA shelter so that Hershel can save Carl’s life. Lori and Rick discuss the relative merits of saving their son versus just letting him die. Meanwhile, back in the woods, Daryl continues his search for Sophia.

While Hershel and family lay Otis’ memory to rest, and Shane tries not to look guilty about what he did, most of our ragtag band try to rope a rotting corpse out of a well so as to avoid contaminating the water. Nice try guys, but methinks that ship has already sailed. Meanwhile, back in the woods, Daryl continues his search for [snooze] while Glenn and Maggie bond on a run to town.

Yeah, cos if you get him out then the water will instantly be fine!

Daryl ‘borrows’ a horse from the farm and ends up down in a creek with a crossbow bolt through his own side and visions of Merle dancing in his head. Praise be for sturdy boots, that’s all I can say. Meanwhile, back in the woods, Daryl continues his… aw fuck it.

Scores: Daryl – 2 walkers, 1 squirrel. And an extra point for just being a total badass.

THERE’S WALKERS IN THE BARN! I knew that cameraman was trying to tell me something!

Shane kicks his shooting school into high gear before taking his best student to chase down a lead on Sophia, giving Daryl a day off after getting shot in the head. Lori sends Glenn for some morning after pills (hey Lori, they’re called ‘morning after’, not ‘whole bunch of weeks after’) and he and Maggie wind up in a close scrape, only to be saved by some handy shelving and a big damn knife. 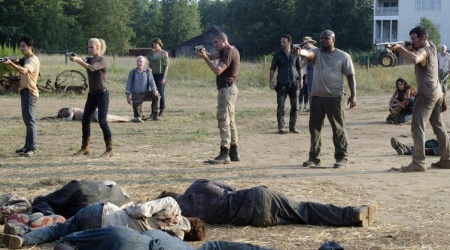 Anybody want to make a “couldn’t hit a barn door” gag? Now’s the time.

Totals for this half-season:

Despite taking a whole bunch of time to mope about the farm, Rick maintains his lead. Shane gave him a good run for his money, while Andrea is showing the rest of the ladies how it’s done. Shame Daryl’s 100% record had to come to an end though.

These seven episodes saw 54 walkers and one unlucky soul go down. That’s two full deaths per episode fewer than the season 1 average. In the body-count stakes alone, it’s easy to see why there were so many complaints of boredom while season 2 was airing. I mean I watched this bunch in an afternoon so the whole “search for Sophia” thing didn’t really annoy me too much, but I feel for those of you who had to spend a month and a half waiting for that barn door to open.

But hey, we have a bunch more season 2 episodes to look forward to. Will things pick up again? How many more life-threatening injuries will Daryl walk off? Who will survive, and what will be left of them? Tune in next time to find out…