It’s a good thing we’re getting near the end of the year, because my unnamed movie streaming services have turned out to have pretty slim pickings when it comes to kids films that are even remotely watchable for anyone with a mental age higher than 3. Luckily though, today’s choice doesn’t fall into that category. 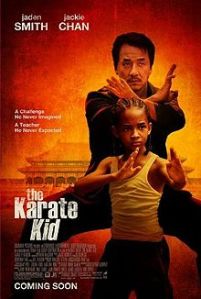 Jackie Chan’s still got it.

12-year-old Dre Parker moves with his mother from their home in Detroit to Beijing. On his first day he falls afoul of the school bully, Cheng, who happens to be a kung fu fighter. Predictably, Dre gets his ass handed to him and, determined to regain some dignity, recruits his building’s handyman to teach him how to defend himself. But of course, they both end up learning from each other. Tournaments ensue.

Let’s get the formalities out of the way first: other than a few minor details, this film is a direct replay of the 1984 classic. One of those details is the fact that there is no karate in the movie. None. The lack of a name change was at the insistence of producer Jerry Weintraub, although in China the flick was released as The Kung Fu Dream, so that’s okay. You’re probably expecting a repeat performance of my “pointless remake” rant about now. Well, hang on to your hats folks, because today is going to be a little different. I really enjoyed this movie.

In 1984, the differences between Daniel and the other kids was economic. He was the poor kid with a single mother interloping in the country club set. That reflected the times, and it was a compelling story, but these days it just wouldn’t have the same impact. In the updated version, the difference is one of race; as a young American kid in China, Dre is in a totally different barrel of crap than Daniel-san ever was. At least he could fake it. No matter what he says or does, Dre will stand out, and will be a target for the more violently-minded classmates. Because of this, the final scene at the tournament has a bit more of an impact than it did 26 years earlier (damn, that makes me feel old).

You’ve probably noticed the age discrepancy as well. The characters in this update are a good five years younger than in the first iteration. Of course this was done purely to allow Jaden Smith to play the lead, but it gives the romance subplot a bit of an odd feeling. If they’d been even 14 instead of 12 it would have been a shade more believable. On the other hand, making the kids this age makes Dre’s initial helplessness easier to swallow. It’s also a good excuse to give Taraji P. Henson plenty of screentime as Dre’s mother Sherry, which is never a bad thing.

Despite all of this though, the film succeeds for one reason above all others: the casting. I’m not gonna beat around the bush here, Jaden Smith is a star. This ninety-pound charisma bomb takes a character that could have been a whiny little punk and makes him sincere. No matter what hijinks he gets up to, Dre is instantly likable and you want to see him succeed. As for Mr Han, well, it’s been a while since he’s had the opportunity to prove it, but Jackie Chan is a really good actor. Han is a much more maudlin character than he has ever played before, a man with demons. His breakdown scene is even more powerful than Pat Morita’s was. It’s the chemistry between Dre and Han that anchors the whole film. The other kids fare less well. Even though this version is a good fifteen minutes longer than the original, there is a much greater focus on Dre and Han’s relationship, to the detriment of any development in the supporting cast. Where Johnny and the Kobra Kai had whole scenes to themselves, here Cheng’s friends don’t even get names.

He’s punching so fast YOU CAN’T EVEN SEE HIS ARMS!!!

The fight scenes are believably brutal. You can’t help but wince a little when Dre is getting kicked in the gut by Cheng again and again. Even though plenty of doubling was done during the tournament scenes, Smith obviously does quite a bit of stuff himself. The kid was well-trained by Jackie and his resident stunt team. The tournament sequence is just as thrilling as it was before, although there is a distinct lack of Joe Esposito telling us that we’re the best around. Ironically enough, putting that song in the movie would at least have meant the “history repeats itself” line makes sense for once.

The Karate Kid comes in at a butt-numbing (for a kids film) 140 minutes. It mostly rattles on quite happily, though excising maybe twenty minutes in the middle wouldn’t have been the end of the world. Running time aside, director Harald Zwart has done a good job in crafting a family film that will allow young kids to enjoy some beat-em-up action while sneaking in a few lessons about family, respect and honour. Bring on the sequel.