There are many types of film I enjoy watching (perhaps you noticed), but one type I adore is the western. Given the freedom of choice, and purely for the pleasure of the experience, I would rather watch a middling western than a good horror film. Up until today my favourite western and thus my favourite film had been Tombstone. I realise that might upset some of you. “What about The Searchers?” I hear you cry. I can already hear Jon Abrams rearing up in defence of The Good, The Bad and The Ugly and while I appreciate his opinion and yours, this is a matter of personal taste and I must respectfully stand my ground. Leone’s opus is a wonderful film, that cannot be denied, but Tombstone just always does it for me. Or at least it did…

The Dude is The Duke

Actually, I reckon The Dude beats The Duke with one eye closed. The Coen Brothers’ True Grit is the second adaptation of the book by Charles Portis, after the 1969 version starring John Wayne as Rooster Cogburn. Here, Jeff Bridges takes on what some see as the signature role of Wayne’s later years and makes it completely his own.

Mattie Ross is a fourteen year old girl who arrives in the town of Fort Smith, Arkansas to retrieve her father’s body after he was killed by his hired hand, a man named Tom Chaney. Since none of the authorities in Fort Smith seem willing or able to pursue Chaney, Mattie decides to “hire” a U.S. Marshal to go after him. After his repeated refusals fail to put her off, Rooster Cogburn agrees to accept Mattie’s reward for catching Chaney. The two are joined by a dandy of a Texas Ranger named LaBoeuf, and they ride out into the Choctaw Nation in pursuit of the varmint. As plots go, it is not the most elaborate you will ever see, but when it is written this well, who will care?

I love this film. I would marry it if I could. This is just a truly gorgeous piece of cinema. Joel and Ethan have done period flicks before of course, but this is their first foray into the western and they have brought all their wit and style and chutzpah with them, but leaving the wickedness their humour often displays at home. That is not to say that this film is without humour, but that it comes from the believable personality clashes of these fully realised people. With his jangling spurs and his self-importance, Matt Damon plays

LaBoeuf as a peacock: all puffed up in the chest and averse to criticism. Jeff Bridges is of course a joy to watch, but it is young Hailee Steinfeld in her first feature who owns this film. Her Mattie is a spirited and witty girl, intelligent beyond her years and brave beyond her stature. To see her out-talk every man she comes across 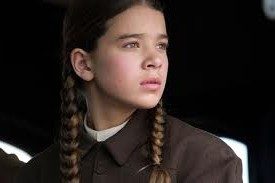 is a wonderful sight. Josh Brolin as Tom Chaney and Barry Pepper as the gang leader “Lucky” Ned both take ample advantage of the limited screen time they receive to create indelible impressions, although they are helped by the fact they have been talked about by the others for so much of the piece. This could have gone so very, very wrong had the casting not been this fortuitous.

Roger Deakins won the BAFTA for best cinematography for this film, and it was richly deserved; the camerawork is magnificent throughout. Despite all I have mentioned though, the undisputed highlight in my eyes is the script itself. The Coens have crafted something utterly poetic from Charles Portis’ novel, the story of which this version hews much closer to than its predecessor, particularly with regard to the ending and the framing device of Mattie’s narration. In 1969, John Wayne’s Rooster was the focus, but the Coens have returned the story entirely to Mattie. Every scene is told through her eyes and in her distinctive voice. And what a voice it is.

Had I watched this film before year’s end, there would have been a dramatic shift in my Top 11 of 2011 list. Number one with a bullet: True Grit.