I’ve been looking forward to watching this film for quite a while now. It’s been worth the wait.

This movie really does have something for everybody.

George Clooney plays Jack, a man seeking redemption for past misdeeds in a small Italian town. Jack makes guns to order for a shadowy cabal represented by Pavel, his contact. As well as making the weapons, Jack is well-versed in using them too, and when his time in Sweden ends very suddenly and very badly in a shocking prologue scene, Jack has to lie low in Castel del Monte. It is here in this small mountain town where the armour he has put up around himself starts to crack, firstly due to his burgeoning friendship with the town’s priest, and secondly because of the woman he begins to fall for. When he takes on one final job for Pavel, the violence he is trying to escape comes back to haunt him.

The American is only former photographer Anton Corbijn’s second feature as director, after his Ian Curtis biopic Control, but the years spent in his previous career have made him a superb visual storyteller. To say the dialogue in this film is sparse is to redefine the meaning of the word. Entire scenes play out with nary a word spoken. Corbijn’s strength, and that of his actors, is in making you understand the feelings and motivations of these people without having to rely on words. In the hands of another crew, this film would likely be interminably dull. 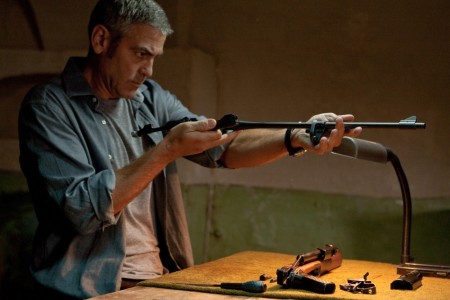 Why is there always one screw left over?

Jack is Clooney’s most stripped-back performance since the astronaut Chris Kelvin in Solaris. In recent years he has been leaving behind the head-tilts and twinkly eyes that made him a star in the first place, but in this flick, Dr Doug Ross seems like a lifetime away. Violante Placido is heart-stoppingly beautiful as Clara, the local prostitute Jack eventually falls for. She’s worldly when under the red light bulb, but has a sweetness to her in all her other scenes. One in particular stands out; oddly enough, it’s one of the few scenes in which she’s fully clothed throughout. This sequence – in which Clara is asking Jack if she can see him outside their current financial arrangement while out showing her friend around the town – is a beautiful thing. With fairly basic dialogue Clooney and Placido both show all the hope and fear and confusion that happens when you ask someone that you really like out on a date, made even more anxious by the fact that these two already have the relationship that they do, on top of which it seems as if Clara’s friend Anna is in the dark about Clara’s profession and therefore the exact nature of her and Jack’s acquaintance. Jack initially thinks Clara is asking him to come to the brothel as a customer, and the flash of hurt in her eyes is so believable you almost want to reach in the screen and hug her.

Corbijn has admitted that he sees The American as a western. Just in case the audience don’t catch on to this, he places a television in one scene, with Once Upon a Time in the West showing. The film does echo a lot of the spirit of that genre, the Spaghetti variety in particular, but with subtlety. The film never seems like a pastiche or a gimmick. It’s also nice to see Clooney get the chance to show off his Italian on screen, after all that time spent at Lake Como. If you come to this looking for Danny Ocean kicking back in Italy, just keep walking. Your kind aren’t welcome here. On the other hand, if the idea of Shane in the Abbruzo mountains with a suit and a Walther tickles your fancy, then my friend, you can take a seat.

On an unrelated side note, a friend of mine at the office lent me her copy of Miike’s Ichi The Killer today. I think I’ll save that for next Sunday, what do you lot reckon?