And Fridays are looking up again. After a few lean weeks, we are back with a stone classic, and deserved Oscar winner. 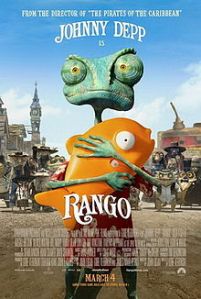 A pet chameleon falls from a car racing along a desert highway. Stranded and alone, he finds himself in the Old West town of Dirt, populated by all sorts of desert animals. He claims to be a gunslinger named Rango and, oddly enough, is quickly appointed sheriff. The town is drought-stricken and Rango takes it upon himself to sort out the water supply. What he finds may just be the end of him, and will almost certainly change the town forever.

Let me open with a quick statement. Rango is the best western parody since Blazing Saddles. It is immediately in my top 5 animated films of all time as well*. I really dug this movie. The animation itself – ILM’s first shot at producing a full-length feature in-house – is fantastic, full of gloriously realised and expressive characters and beautiful scenery. The photo-realism in many of the shots is just breathtaking. Having Roger Deakins (True Grit) as a cinematography consultant was money well spent. 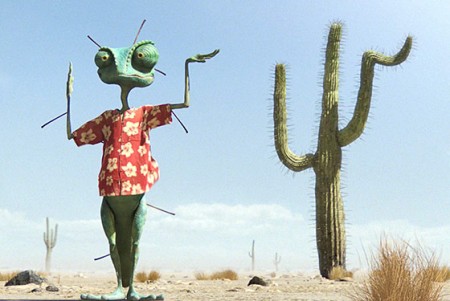 Rango seemed to misinterpret the meaning of “chameleon”.

Gore Verbinski apparently took on this project with the intention of doing a “smaller film” after the somewhat bloated third Pirates flick, At World’s End. He drafted his favourite leading man, Johnny Depp, to play the heroic lizard, and he takes the role like he was born to it. The rest of the cast are equally flawless, with Isla Fisher as Rango’s love interest Beans and Ned Beatty as the corrupt mayor being particular standouts. My personal favourites though would have to be the owl mariachi band who crop up as a Greek (or Mexican?) chorus throughout.

The story itself borrows freely from all sorts of sources, but always fitting the tone. There are elements of Corbucci’s Django (of course), Leone’s Dollars Trilogy, Chinatown, even an occasional nod to Star Wars and Lord of the Rings. I have to mention the soundtrack as well. Hans Zimmer has crafted a magnificent score that echoes Ennio Morricone, Luis Enríquez Bacalov and Beethoven amongst others, proudly wearing its influences on its sleeve. I’m actually listening to the album right now as I write this, and it is fantastic.

I want these guys to play every party I ever go to.

It’s hard to fault a movie like Rango, in all honesty. It is sharp and witty yet goofy at the same time, and funny enough to please the kids who won’t get all the references and homages. It might be a bit much for some of the younger ones though.

*When I figure out what the other four are, I’ll let you know.