I haven’t watched nearly enough westerns this year. I am planning to fix that over this second half of the 366 days, but if you lot have any specific suggestions for me, you know what to do (hint: click up there where it says “Suggestions”) 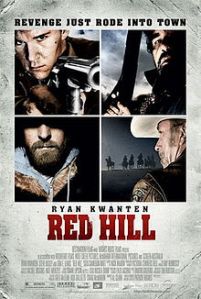 Constable Shane Cooper reports for his first day with the Red Hill county police after moving out of the city with his pregnant wife. At the same time, convicted murderer Jimmy Conway is escaping from maximum security prison and heading back to Red Hill to get his revenge on the men who put him away. The local police chief, Old Bill, deputises some of the townsmen to lock down the town and watch out for Jimmy with orders to shoot on sight, but once darkness falls Jimmy makes it through the blockade. Will he get his revenge? Who will live to see the sun rise? And what is Shane not being told?

After John Hillcoat’s The Proposition, Red Hill shows that the western genre is alive and well, and living in Australia. This is the feature debut of writer-producer-director-editor-teaboy Patrick Hughes, starring True Blood’s Ryan Kwanten as Shane, Steve Bisley (Mad Max) as Old Bill and Tom E. Lewis as Jimmy. Hughes’ script starts off as a bit of a slow burn, following Shane on his first day in the town, before slowly but inexorably tightening up and increasing the tension as night falls and Jimmy makes his way into Red Hill.

For those who only know him from five years of True Blood, it might be a bit jarring at first to hear Kwanten with his natural accent, but stick with it and you’ll see a character that couldn’t be further from Jason Stackhouse. Shane is not only the nominal lead, but also the emotional core of the film; a loving husband and imminent father and a dedicated police officer who finds himself at the centre of a shitstorm nobody saw coming. Bisley is great as the acerbic Inspector who arrested Jimmy fifteen years earlier for the murder of his own wife, but Lewis steals the film from under everyone’s nose with just seven words of dialogue and some great prosthetic burn scars. His Jimmy is almost an implacable spirit of vengeance, seemingly appearing all over town at will and using his shotgun and pistol to devastating effect. Fifteen years in maximum security haven’t dulled his aiming or tracking skills one iota.

He cut himself shaving.

If not for the cars and the frequent mentions of the commications tower outside town (which is conveniently destroyed early on), Red Hill could have been taking place in the 1800s. It is an archetypal story but told with panache by Hughes and his cast and crew. The cinematography shows off the landscape of the Victoria high country well, albeit with some digital augmentations to set the mood. Dmitri Golovko’s score is fantastic; starting off with sparse guitar and percussion but building throughout to the almost Morricone-esque horns near the climax. As good as the music is in isolaton though, it helps to demonstrate a tonal flaw in the film. The whole movie is played completely straight and deadly serious, but there are little touches that seem to point to a sense of humour that the picture doesn’t support: for example Shane Cooper’s wife’s name (Alice – think about it…) or the chief cop being named Old Bill, or even the spaghetti western music. These are all by no means enough to take you out of the film, but they do give the flick a bit of unevenness at times. And then there’s the panther. A symbol of encroaching wilderness trying to reclaim the dying town or a case of “throw it in and see what sticks”? Maybe the director’s commentary will clear that one up for me.

He looks like he just woke up in a Bob Ross painting.

The ending shouldn’t come as any surprise to anyone familiar with either the revenge movie or the western genres, but like the rest of the movie it is handled with some flair by the three excellent leading actors. Red Hill is another example of Australia’s strong genre film industry, and is really worth a watch.