And we’re back to Friday. The regular weekend theme columns will be a little shook up this week: I’m going to see Prometheus in the morning, so I might not be able to fit in my documentary once that’s been written up. It depends on how many beers I go out for afterwards! But for now, here’s a nice wee cartoon for you.

END_OF_DOCUMENT_TOKEN_TO_BE_REPLACED

I realised the other day that I haven’t watched too many musicals this year. Musicals used to be the pinnacle; the jewel in the Hollywood crown. Arthur Freed, Busby Berkeley, Gene Kelly, these names were spoken of with the same reverence reserved now for your Steven Spielbergs and Christopher Nolans. And when was this Golden Age of the musicals? The thirties, forties and fifties. Times of depression, war, massive upheaval. But inside a musical the world is better. People fall in love, they dance, they can’t help but sing their troubles away. When the real world is turning to shit, that’s when we need the escapism that musicals can provide. There have been sporadic bursts of life from this oft-maligned genre since then of course, but if you hold up a studio balance sheet next to a history book, guess what you see? And where are we these days? Wars, recessions, massive upheaval… So I figured I’d watch a musical today.

END_OF_DOCUMENT_TOKEN_TO_BE_REPLACED

That time again, friends. I figured I would take a break from the recent spate of martial arts and filth here on WTF Sunday and take a trip back down Sexploitation Boulevard. Would you care to join me? END_OF_DOCUMENT_TOKEN_TO_BE_REPLACED

If I had realised sooner that today was Star Wars Day, I would have made an effort to get the animated Clone Wars movie for this week’s Kids’ Film Friday. Unfortunately 7:30 this morning was a bit late to do anything about that, so I went with this tip from my roommate Iida, who saw this flick when she was but a little field mouse herself, and had the ever-living crap scared out of her. This one’s for you, Iida. END_OF_DOCUMENT_TOKEN_TO_BE_REPLACED

I realise this is supposed to be Kids Film Friday, and when I put this flick on this morning I was expecting a kids’ film. Now that I’ve seen it though, I’m not so sure. END_OF_DOCUMENT_TOKEN_TO_BE_REPLACED

I’m going to see The Avengers in six days. Sorry. I’m going to see Marvel’s Avengers Assemble in six days. Yes, I know it’s a silly name but hopefully it won’t tarnish the film itself too much. To get myself appropriately hyped up for this, I went hunting on Netflix for some kind of Avengers-related feature animation for this week’s Kids Film Friday. Here’s what I found. END_OF_DOCUMENT_TOKEN_TO_BE_REPLACED

Today is Friday the 13th. What better way is there to celebrate Kids Film Friday (the 13th) than with a scary Scooby-Doo mystery?! END_OF_DOCUMENT_TOKEN_TO_BE_REPLACED

This has been quite a difficult piece to write today, for the simple reason that I can’t really make up my mind about this film. I don’t hate it, but I’m not sure how much I liked it. 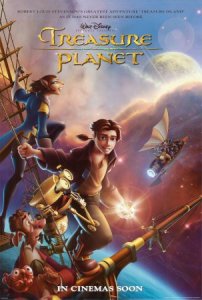 Everything seems cooler in space.

Surely everyone knows this plot by now, but here it is anyway: Young Jim Hawkins (Joseph Gordon-Levitt) finds a map to where the old pirate Captain Flint left all his treasure. He goes on a ship to find it, but most of the crew, led by the cook Long John Silver, mutiny and try to steal the treasure. Some fights happen, some pirates die, some are captured, Jim gets a share of the loot, goes back home and lives happily ever after.

There are a few slight differences to the original text however, chief among them being aliens. That’s right. With the exception of Jim and his mother, every character in this flick is some sort of odd-looking beastie. Some are merely anthropomorphised animals, while some are just all-out wacky. The captain of the Legacy – the ship commisioned by Jim’s mother’s friend Dr Doppler to make the voyage – has been changed to a female, probably just to dilute the sausage-fest that was the source book. She is an oddly-sexualised cat lady in fact, with the cut-glass accent of Emma Thompson. Cat lady as in Neytiri, not as in creepy lonely woman with too many pets. Dr Doppler, as played by Niles Crane himself, David Hyde Pierce, is a dog so of course these two end up together by the end. John Silver (he mustn’t be very long in this world *snigger*) is some kind of bear thing, I think. It’s hard to tell with the bionic arm and eye. The rest range from giant spider to thing that speaks in fart noises, and the look-out has about eight eyes that pop out on stalks. I suppose that comes in handy with his chosen profession. How much of a distraction you find all this probably depends on your age and familiarity with the novel. It wasn’t a huge deal for me, but I’ve only read the book once and that was not exactly recently.

The dog and the cat end up having kids together. Probably followed by an appearance on Jerry Springer. Or should that be Jerry Springer spaniel...

The bit I had more trouble accepting was what the filmmakers call the Etherium. In this universe, atmospheres don’t just occur around planets, but they fill all the space between them too. This means that a traditional open-decked wooden galleon can sail from world to world with a few rockets strapped to its keel. It seems like something they thought up over a few beers at lunch one day as a way to shoehorn in their central conceit, and it just ruined my suspension of disbelief. 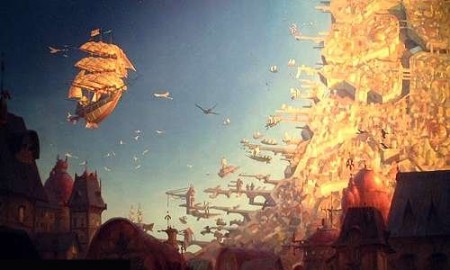 You're gonna talk about suspension of disbelief? This is Treasure Island In Space. Disbelief has left the building.

This film has a lot of shared DNA with the superior (but equally unsuccessful) Titan A.E. directed by Don Bluth, and written by nerd-legends Joss Whedon and Ben Edlund. If you have to pick one of these, I’d go with that one.

In the credits for this 2002 Disney release, a group of animators are listed under the heading “Journeymen”. That’s a good word to describe this film as a whole. It’s moderately exciting, and paints over Stevenson’s classic novel with an artfully tarnished coat of steampunk sci-fi, but it’s not really exceptional or memorable in any way. I finished watching it about three hours ago, and I’m already struggling to recall a single line of dialogue. Coming out the year before Disney’s other, bigger pirate adventure, this was clearly the screenwriters Ted Elliot and Terry Rossio’s dry run for Will Turner and Cap’n Jack.

Charlie from the office raided her son’s DVD collection and has lined me up with a whole month’s worth of Kids Film Fridays. Now my only choice is which order to watch them in.

Much more fun than cowboys.

A meteor lands on a woman named Susan just before her wedding. Instead of crushing her into a big red puddle, she ends up growing 50 feet tall (luckily her wedding dress does a Hulk though – it rips and splits but still covers all the important parts). Captured by the army, she is confined to a special base overseen by General W. R. Monger, with more monsters: Dr Cockroach (mad scientist who accidentally turned himself into a cockroach), the Missing Link (ape-fish-man-thing, discovered frozen under the ice sheet), B. O. B. (sentient gelatinous goop. What happens when you inject a tomato with irradiated Ranch dressing), and Insectosaurus (side-effect of nuclear testing). When an alien arrives to retrieve the matter that makes up Susan’s meteor – and kill or enslave all humanity – it is up to the monsters to save the Earth.

Confession time: It is almost midnight and I’m about to fall asleep. I don’t think my brain will cope with any kind of real analysis here, so I’m going to do this review in list form. What I particularly liked about Monsters Vs Aliens, and what I didn’t.

What I particularly liked about Monsters Vs. Aliens:

I was actually cheering at this bit. Yes, I know how sad that is.

And what I didn’t:

So there you have it. Overall, it’s a win. I could go on about the themes of self-discovery and acceptance, and the strong female lead, and all the little easter egg references to classic monster and sci-fi flicks, but I really need to go to sleep. What I will say is that I was watching this on the bus home from work tonight and I embarrased myself several times by bursting out laughing. If that’s not a recommendation, then I don’t know what is. 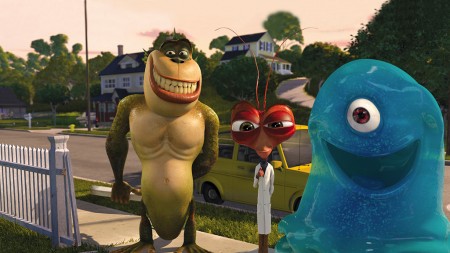 One of these guys can build a death ray out of a pizza box, two tin cans and a paper clip.