It’s Christmas Eve. Also known as day 359 of the year 2012. I’m hanging with the family here at my sister’s place, waiting for the big beardy fella to stop by with all sorts of goodies for my two nieces. There is one tiny drawback to this, which is that it’s harder to get some time to myself to watch a movie, so I waited until everyone else had gone to bed and then I watched this. It’s not Christmassy. I don’t care. Merry Christmas, happy holidays, praise His Noodley Appendage… Whatever you’re into.

I want a groovy hat.

Congressman David Norris has just lost the Senate election. While practising his concession speech in the toilet, he meets Elise, a mysterious dancer who inspires something within him. The two of them instantly fall in love, but there are those who do not want David and Elise to be together. There are those who want to stick to the plan, at all costs.

The power of love is a curious thing. It makes one man weep, makes another man sing. Marketed almost as a cross between Bourne and The Matrix, The Adjustment Bureau is actually a fairly old fashioned love story, albeit one with a healthy dose of metaphysical intrigue wrapped around it. But since it’s based on a Phillip K. Dick short story, what were you expecting? Straightforward? Our Romeo and Juliet here are Matt Damon and Emily Blunt, who really do make quite the cute couple. Writer George Nolfi—making his directorial debut—puts a lot of stock into the chemistry of his leads and with any other pair he would have struggled quite a bit more to pull this off, but together they really work Damon and Blunt both bring a very endearing sincerity to the entire endeavour, so much that you really want these two to beat the odds . The more stone-hearted in the audience might not buy the whole love at first sight thing, but if you’re one of those then the rest of the movie will fall flat. 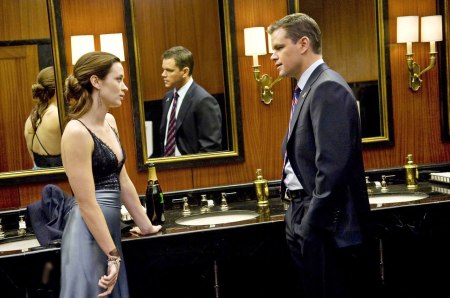 Fall instantly in love with Emily Blunt? Yeah, I can buy that.

The titular bureau are the men who make sure everything and everybody follows the plan. But whose plan is it? God’s? Are they angels? It’s hinted at but never explicitly said, though if they are then they are definitely the most debonair celestial beings I’ve ever seen, with their sharp suits ans swanky headgear. In fact John Slattery could have stepped straight from the set of Mad Men to take the role of Richardson, a senior member of the bureau. Actually I believe his job title was Snarker in Chief. Anthony Mackie is good as always (when is this guy getting his lead role?) as Harry, the bureau man assigned to David who finds his loyalties torn. And Terrence Stamp is properly creepy as the enforcer set on David when he starts rebelling against the plan. 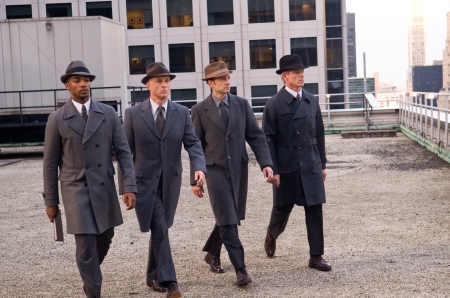 Nic Cage and Andre Braugher wish they could have looked this cool.

In his first feature, Nolfi proves that he’s been paying attention to the  directors he’s worked with in the past. If anything, this feels almost like Soderbergh lite, and not just because of his fellow Bostonian leading man. He has good grasp of both plot and character, but it’s unfortunate that the film leaves David’s life behind once he decides to fight for Elise. A bit more of Michael Kelly as his best friend and campaign manager wouldn’t have gone amiss. There are plenty of little touches that make this feel like a believable world even with all the fantasy elements. Nolfi has done well at building a real world to put this story in, and he knows what to spell out and what to leave up to your own interpretation. It’s an impressive debut, and I’m confident to see what he comes up with next.