The weather outside isn’t really all that frightful to be honest, and I don’t have a fire. But since I’ve no place to go, how about we watch a movie? 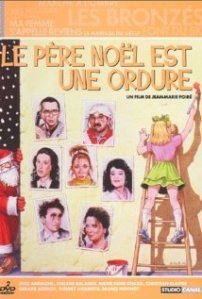 It is Christmas Eve in Paris. Technically, I suppose it’s Christmas Eve almost everywhere, but since this story takes place in Paris, we’ll just stick with that. Pierre and Therese, the two volunteers manning the SOS Friendship suicide helpline, are settling in for the night shift, only to caught up in an ever-escalating cascade of classic French farce and the blackest of black comedy as their office is invaded by a heavily pregnant lunatic, a gun-toting Santa Claus, a depressed transvestite and the odd Bulgarian neighbour with his even odder native delicacies. And the elevator repairman; mustn’t forget him.

This film, released in 1982, is an adaptation of the play of the same name, created by the theatre company Le Splendid and first performed in 1979. The cast is made up of the company members reprising their original roles, with a handful of regular collaborators making up the numbers. The movie takes a little while to pick up a head of steam, but once it gets properly going it is full speed ahead through a night of absolute lunacy. Considering they all know these parts inside and out, the cast are appropriately excellent, particularly Thierry Lhermitte as the straitlaced Pierre and Josiane Balasko as the helpline’s manager, the formidable Mme Musquin.

This might not be to everyone’s taste, especially those with no time for subtitles, but it manages to show off the darker and lonelier side of the holiday while still making you cry with laughter.