Once again, thanks Netflix. (Other streaming services are available)

Turn down the brightness first.

In 1988 a pre-teen computer genius was sentenced to 7 years without a microchip for a crime he did commit. Seven years later, this kid promptly escaped from a maximum security bedroom to a New York high school. Today, still wanted by nobody, he survives by doing his homework. If you have a problem, if no-one else can help, and if you can tolerate his ridiculous clothes, maybe you can hire… Jonny Lee Miller. (Cue: machine guns)

Ah, the mid-nineties. People give the eighties a bad break as the decade that taste forgot. I mean if you are in any doubt that the nineties were just as bad, watch this and try to keep a straight face. But once you get past the frankly terrifying colour scheme of Hackers, there is a fairly old-fashioned story here; a bunch of smart kids go up against the mean grown-ups to save the day and clear their names. It just so happens that these kids do it with laptops and payphones instead of BMXs and walkie-talkies.

As unrealistic as it might be, it makes a change to see hackers in a movie portrayed as good-looking, social kids instead of overweight, spotty oiks who never leave their basements. It’s actually quite entertaining to see them whizzing through New York on their inline skates. Clearly inspired by the cyberpunk aesthetic, Hackers could arguably be presenting an alternate world where the kids from this subculture are the new superheroes. Basically, it’s a fantasy film.

Where Hackers falters is the script itself. Written by Rafael Moreu, the story tries really hard to make sitting in front of a computer seem dynamic and interesting. Unfortunately the dialogue – particularly that given to the villain, a corporate computer security expert played by Fisher Stevens, who calls himself “The Plague” – is so overly stylised and arch that it really defuses any drama there might be.

Where it succeeds, however, is with the cast. The hackers themselves have great chemistry together. You can really believe that this group all hang out. A pre-Trainspotting Miller anchors things as Dade “Zero Cool” Murphy, the eighteen-year-old version of that juvenile delinquent from the prologue. Angelina Jolie gets an early leading role as Kate “Acid Burn” Libby, Dade’s reluctant love interest. She doesn’t really have much to do other than pout, type and go swimming in her underwear, but she does it all with characteristic aplomb. Matthew Lilliard overacts as shamelessly as ever, playing “Cereal Killer” and Renoly Santiago is “Phantom Phreak”, Dade’s introduction to this group once he arrives at his new school. He disappears about halfway through the flick after being arrested, but I have a theory about that*. The crew is rounded out by Laurence Mason as “Lord Nikon” and a cherubic Jesse Bradford as “Joey”. Yeah, he must have been at the back of the line on Cool Nickname Day. 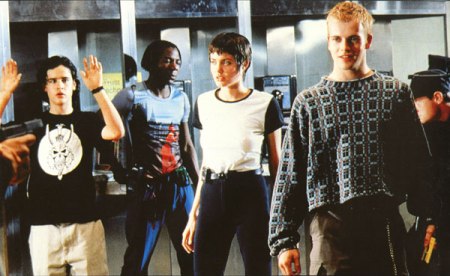 This is the Fashion Police! You’re all under arrest!

Speaking of Lord Nikon, Hackers features a distracting amount of product placement, to the point where I almost expected to see Apple and Coca-Cola listed as executive producers.

Director Iain Softley does what he can to keep the excitement level up, disguising the somewhat ropey dialogue behind flashy camera moves and dramatic light shows. Ironically (to me at least) the depictions of the inside of the supercomputer as a cityscape of chipsets was all done with models and motion control, not created inside a computer. In the end, Hackers is a snapshot of a time that never really existed and has not dated well. Kids watching this now – who weren’t even born when it was released – will laugh their asses off at the fashions and the clunky technology but might still get caught up in the story.

*So here’s my theory. A kid like Phreak would not do well in the joint, let’s face it. After his trial and incarceration, I reckon he started going by the name Sally-Can’t Dance, ending up on a prisoner transport plane that was hijacked by a bunch of cons trying to escape, only to be slapped in the face by a former Army Ranger wrongfully convicted of manslaughter who was on his way home to see his daughter for the first time on her seventh birthday.