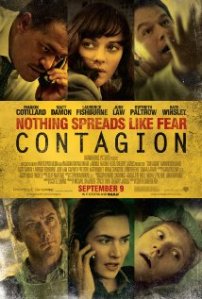 Wash your hands. A lot.

An American woman in Hong Kong shakes hands with a chef. So begins a chain of events that almost brings the world to its knees, as the virus picked up by the woman is passed to just about every country on the planet, killing millions.

Remember Outbreak? That was some prime, grade-A, mid nineties cheese about a virus infecting a small town in northern California. It was the one with the cute monkey; the movie that made Dustin Hoffman into a renegade Army colonel action hero. Well, this is not Outbreak. This is Irwin Allen’s Outbreak. The king of the all-star cast disaster movie would have liked this one, I think. Directed by Steven Soderbergh from a script by his Informant! collaborator Scott Z Burns, Contagion is told by interweaving several stories in various cities from Minnesota to Macau, following key individuals as they suffer from and fight to find a cure to this new virus.

Soderbergh has proven time and time again that he excels with large ensemble casts as much as with his more intimate films. Contagion doesn’t really have a lead role, but Matt Damon, Laurence Fishburne and Jennifer Ehle probably come closest to that description. Damon plays Mitch Emhoff, the husband of Patient Zero. He is the everyman, the regular guy through whom we see how the virus is affecting the world on an individual level. Fishburne and Ehle are the scientists working at the CDC in Atlanta who are charged with finding out what the virus is and creating a vaccine. These three, along with every other person in the film, are entirely believable characters; real people plagued (sorry) by doubts, making good decisions and poor decisions.

And John Hawkes is in it. Shit, it must be good.

Crucially, Burns and Soderbergh don’t feel the need to shoe-horn in a human villain. This is a disaster movie, not a Bond film. The virus alone is enough of a baddie for this horror story. Jude Law comes close as the snaggle-toothed blogger Alan Krumwiede, who is paid to hype the benefits of a homeopathic remedy to his 12 million online followers. Arguably his actions serve to increase the spread of the disease as people congregate to get their hands on this snake-oil while ignoring the government-produced vaccine, but he’s not an evil man, just a selfish one.

As good as the cast and script are – and they are very good – it’s the smaller touches that push Contagion into the top bracket of the genre. Cliff Martinez’s pounding electronic score drives the mood of the picture, and Peter Andrews’ crisp cinematography* (using digital RED cameras, fact-fans) really pops into vibrant life on Blu-ray. This is another of the movies that could very easily have been in my Best of the Year list for 2011 had I managed to see it on time.

Does anyone else really want to punch him, or is it just me?