One of the advantages of being involved in this online community is having great movies brought to my attention that I would have probably missed otherwise. Today I’m going to share the wealth a little. 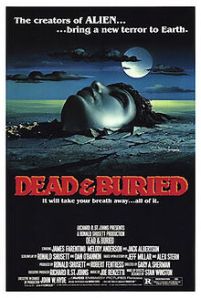 In the small coastal town of Potter’s Bluff, strange murders start to plague local sheriff Dan Gillis. What’s even stranger is when the previously disfigured victims start turning up back in town looking good as new. Can Dan get to the bottom of this mystery, with his sanity intact?

I just have one question to ask before I get into this. Why is Dead & Buried not one of the most famous horror films to come out of that golden age that was the early eighties? I had seen the poster here and there for years but the movie was never really on my radar until I read the review Jon Abrams posted as part of his annual 31 Flavours of Horror season this past October. Now that I’ve seen the film, I just cannot understand why it is not so much better known.

Dead & Buried is a minor masterpiece of escalating tension occasionally broken up by moments of visceral terror. Written by Ronald Shusett and Dan O’Bannon from a short story by Alex Stern and Jeff Millar, the film is one of the most genuinely unsettling pictures I have seen in quite a while. Where other horror movies use the gore effects as money shots, this one uses them as release valves, giving you a chance to let out the breath you didn’t realise you’d been holding for the last ten minutes. Director Gary Sherman does an excellent job masterminding this movie, and turning an entire town into a haunted house where there are no safe rooms.

“You’re just going to feel a little prick…” “That’s what she said!”

James Farentino – star of The Final Countdown and the spin-off series to Dan O’Bannon’s Blue Thunder – is excellent as Gillis; an upstanding pillar of the community who slowly comes to realise the rotten core at the heart of the town he has been charged with protecting. Farentino, who died earlier this year, was one of those actors whose performances you just believed. He was one of the best at playing the everyman hero, bringing his dry, New York wit to every role he took. Watching this stand-up guy losing the plot as the story unfolds is one of the most powerful things about Dead & Buried, leading up to a fittingly overblown final scene.

Like a lot of Shusett and O’Bannon’s other work, Dead & Buried manages to balance the shocks with an interwoven tone of almost black comedy. It’s not a funny film, but it has a self-awareness about the conceit that drives the story. This tone is best represented by Jack “Grandpa Joe” Albertson as Dobbs, Potter’s Bluff’s resident coroner-mortician. This self-described artist of the dead with a constant carnation in his button-hole and a fondness for big-band 45s on his old-style gramaphone is a one-of-a-kind character. The scene where he tells his young assistant Jimmy (played by Glenn Morshower) that he won’t tell Gillis about Jimmy’s weed stash, while Gillis is standing in the room, is a prize moment of humour. Unknown to everyone but him, Albertson was dying of cancer at the time of filming – he passed away a few months after the film was released – and you can almost taste the irony and relish he brought to this, his final role.

Dead & Buried was one of the first films caught up in the UK’s ludicrous Video Nasties controversy of the early eighties, but was later removed from the list. It features some excellent effects work from the young Stan Winston, including two truly startling moments involving a visiting photographer. The first of these, which comes at the end of the bravura opening scene, almost made me drop my snacks even though I knew it was coming.

The rental DVD I got had no extras unfortunately, but there is a disc available with all the bells and whistles. I will definitely be adding it to my Christmas list.