We Own The Night

The Godfather, but in reverse.

Bobby Green is a the manager of a nightclub in Brooklyn in 1988. The club is owned by the uncle of a Russian mobster. As it turns out, Bobby is the black sheep of a blue family. His father is the deputy Chief of Police, and his older brother is a Captain. When the Russians try to bring Bobby into their heroin distribution ring, he finds his loyalties tested for the first time in his life.

Instead of a stand-up guy trying to distance himself from his mob family, James Gray’s We Own The Night looks at it the other way; the rebel son finding himself pushed from a hedonistic lifestyle to the world of crime-fighting. It’s not really a new story, but it is told with conviction by a talented writer/director working with a top drawer cast.

Joaquin Phoenix and Mark Wahlberg here reunite with Gray after the well-liked but little-seen The Yards as Bobby and his brother Joe. Phoenix is almost channeling Brando, while Wahlberg is playing Joe a bit like a more mature and less sweary Staff Sergeant Dignam. The two different approaches work well together, and the guys are believable as semi-estranged siblings. Robert Duvall is, well, Robert Duvall. At this point in the man’s career it’s fair to say that we’ve run out of superlatives. The most impressive member of the cast for my money is Eva Mendes as Bobby’s girlfriend Amada. She takes what could have been a token arm-candy role and crafts a fully rounded, believable character.

Plus, well, you know…

The story doesn’t need to be a period piece, but it’s to Gray and his crew’s credit that they have totally committed to recreating late-eighties Brooklyn without resorting to caricature. They’ve got the clothes, the cars and the music all right, and there are no Flock of Seagulls quiffs to be seen. Director of Photography Joaquin Baca-Asay, who also shot the quintessentially New York flick Roger Dodger, has created a very stylistic look for the film, with a lot of deliberate light and shadows. There are several shots that I’d be happy to hang on my wall, in fact. 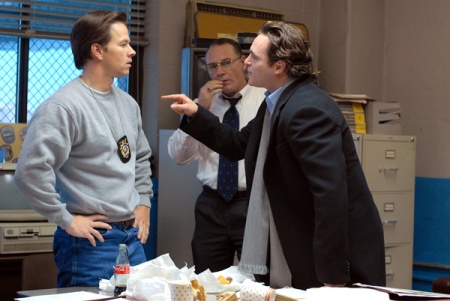 I think where the story doesn’t quite come together is that it can’t help but fall into predictability. By the end of Act I, you pretty much know how the film is going to wind up. That first act felt quite draggy in places as well. Gray has a lot of characters and relationships to set up, and maybe one or two of them could have been hurried along a little. When I compared We Own The Night to The Godfather, I just meant in story terms; taken on its own, this is a well-made, well-acted family drama with some very good moments, but Gray ain’t Copolla. Not yet, anyway.