Everything you’ve heard is true. 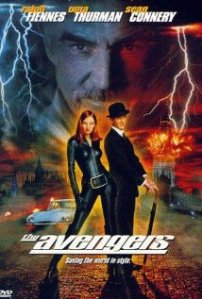 Was everyone stoned that day?

Agent John Steed of The Ministry is tasked to find out who is tampering with a weather shield around Britain. Assigned to help him is the director of the shield project, Dr Emma Peel. She is the prime suspect but says she didn’t do it so that’s okay. Together they accidentally discover a plot by former Ministry man Sir August de Wynter to use the weather shield technology to take control of the weather all over the world, and have governments pay to avoid cataclysm. Then it ends.

Yes folks, it really is that bad. The mental effort to critique this cinematic turd is actually causing me pain. Ralph Feinnes and Uma Thurman as Steed and Emma have absolutely no chemistry together; Sean Connery comes off mostly as a creepy old man (introducing himself to Emma with the classic line “you can get a good ten inches overnight down there”) and the actual plot, well it feels like an abandoned script for a bad Avengers parody. Connery’s performance as de Wynter can probably be best compared to Schwarzenegger’s Mr Freeze – all bad puns and overactive eyebrows.
The actual story is complete nonsense. I don’t mean that it’s a daft plot (though it really is) but that there is no sense within it. People jump from place to place with no reason, there are plot holes you could drive a bus through, and the “jokes” will actually make you wince.

You can’t polish a turd, but you can roll it in glitter. Uma Thurman’s costume designer seems to have taken that mantra to heart. It is entirely possible that Ms Thurman and her catsuit-filling abilities were used to draw the drooling masses into the film, hopefully without them realising how god-awful the movie actually was. It is a disgrace, both to the original series and to cinema in general. Expending any more effort on this review would only give the film more legitimacy than it deserves. There is one telling thing though: Jeremiah Chechik has not directed another film in the 14 years since release. 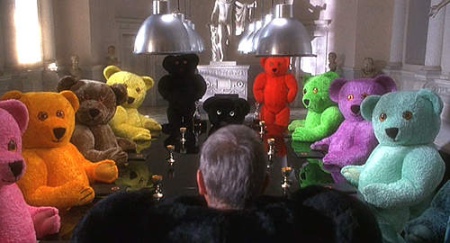 Avoid The Avengers as if your life depended on it.