Horror Week comes to a close with today’s Halloween edition. It’s been a bit of a mixed bag really, but we go out on a bang. The bang of a Winchester repeater, that is… 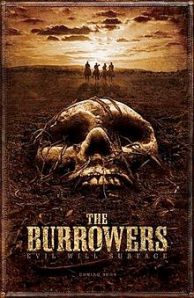 The Dakota Territories, 1879. A settlement is attacked by Indians, with the men all killed and the women and children taken. A posse is formed to hunt the tribe and recover any survivors, but they soon find that it may not be the Sioux who are behind the disappearances after all. Something else is out there, in the dark…

Before starting up this movie, I admit to some less than flattering preconceptions. I was expecting a cheap (and probably bad) Old West Tremors knock-off. What I got instead was a polished, well-made and creepy little horror flick, populated by a recognisable cast and some nasty little monsters. Written and directed by JT Petty, The Burrowers is based on his own short film Blood Red Earth.

This film successfully manages the rarely accomplished task of integrating horror elements into a western setting, but it also has some points to make about imperialism and the racial prejudice of the times; not something you expect to find in this type of movie. The Burrowers themselves are nasty-looking little bastards who wound their victims and poison them, leaving them paralysed and buried alive, returning to eat them at their leisure. They used to live on buffalo, but after white settlers hunted the buffalo to near-extinction they changed their diet to human meat. While some of the Native American tribes have discovered a way to drug the Burrowers through their victims – making them vulnerable – the US Cavalry, embodied by the sadistic Colonel Henry Victor (Doug Hutchison), are determined to wipe out the tribes, unknowingly leaving themselves even more open to attack. The Burrowers become a retribution against the white settlers’ unrestricted rampage across the formerly balanced ecosystem.

You want to watch where you point that rifle, big fella. That’s how accidents happen…

But is it any good? Well, yes it is. The cast, led by relatively unknown Irishman Karl Geary as Coffey, includes Clancy Brown (making his fifth appearance in my year-long quest) and William Mapother as the posse’s two more experienced Indian fighters, and Sean Patrick Thomas as Callaghan, the cavalryman’s cook who becomes friends with Coffey and leaves with him when the larger group separates. The characters are all well-drawn individuals with distinct personalities, and they handle the more bizarre aspects of the story with conviction.

Also, a close-up of this magnificence makes up for a lot.

JT Petty is definitely a name to look out for as his career continues. Also a novelist, The Burrowers is his third feature after the straight-to-video Mimic 3 (which also starred Geary) and the faux-documentary S&Man which examined the world of underground fetish horror flicks. He seems determined to reinvigorate the idea that horror films should have some sort of subtext; that they should have more to say than just “look at all the different ways we can kill pretty teenagers”. It is a noble goal, and good luck to him.