For the penultimate day of Horror Week, join me, if you will, as we journey to a small town in Canada; site of a most unusual outbreak… 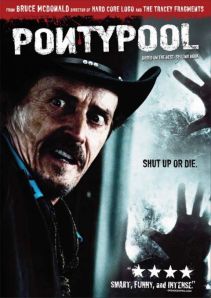 Bugger me, this is scary.

Former radio shock-jock Grant Mazzy is slumming it doing the morning show at a local station in Pontypool, a small town near Ontario. On his way in to work on Valentine’s Day he is startled by a woman babbling incoherently beside his car. Once he’s on the air, reports start coming in of people in the town acting strangely. Soon these incidents escalate to violence and mass death. It is clear that something is going on, but what? Will Grant and his staff make it through the day?

At this point I didn’t think it could be done. I was of the impression that every possible permutation had already been worn out. That there were no new zombie stories left to tell. I really should have known better. Pontypool takes the typical zombie outline and flips it entirely on its head. The result is something that is not only hugely original, but also very, very scary.

Adapted from his own novel (Pontypool Changes Everything) by Tony Burgess and directed by Bruce McDonald – the man behind Canadian cult mockumentary Hard Core Logo – the story plays out entirely within Grant’s radio studio in an old church building, with the outbreak being reported by witnesses who call in to the show. We don’t even see one of the infected until about an hour into the film. If you think this sounds dull and boring you couldn’t be more wrong. McDonald takes full advantage of an ideally paced and genuinely unnerving screenplay to create real tension and fear about what is actually happening outside the studio.

Of course a film like this relies on its cast more than most of the genre, and the three main actors here are outstanding. Popular character actor Stephen McHattie gets a rare leading role and blows the doors right off the place as Mazzy, believably turning a bitter and unsympathetic (but often hilarious) DJ into a hero in less than ninety minutes. He is ably supported by his real-life wife Lisa Houle as station manager Sydney and Georgina Reilly as the young technical assistant Laurel-Ann, recently returned from Afghanistan. These three are basically the only on-screen cast for most of the picture and their growing confusion and fear rubs off on the audience in the best way.

I want that hat.

I haven’t even mentioned the most original aspect of the story yet. This infection isn’t passed on by a bite or a scratch, oh no. It’s in words. In Pontypool, our own language is turning against us. How do you possibly defend against that? I admit that may sound ridiculous, and in the cold light of day it doesn’t stand up to much examination, but watch this film in the dark, late at night, and it works.

Pontypool is probably the nearest any of us will get to the experience of hearing Orson Welles’ infamous radio broadcast of War of the Worlds in 1938. Incidentally, I watched this flick on the 74th anniversary of that broadcast, fact-fans. Pontypool was also produced as a radio play for BBC World Service in 2009, with the same cast. The 60-minute play is available to stream online here. That’s my Halloween taken care of anyway.