Without Joss Whedon and his chums at Marvel, Disney would be hurting pretty bad in the bank accounts this year, thanks to the unexpected failure of today’s film. Is it as bad as their massive financial loss might have you believe? I say nay. It could have been better though.

Solid, but not without flaws.

Three years after the end of the war, former Confederate cavalryman Captain John Carter is approached by Colonel Powell of the Union to assist in his skirmishes against the Apache throughout the Arizona Territory. A reluctant Carter escapes and, chased by Powell’s men, hides in a cave where he is mysteriously transported to another world. Meeting all sorts of strange creatures, he is told he is on the planet Barsoom, and becomes embroiled in another Civil War; this one between the cities of Helium and Zodanga. It turns out that what the locals call Barsoom, John knows by another name: Mars.

John Carter (referred to during production by the more interesting name John Carter of Mars) is based on the first book in Edgar Rice Burroughs’ Barsoom series, A Princess of Mars. The book was published in 1917, but the chapters had been serialised in The All-Story magazine five years earlier, meaning that the film was released just weeks after the 100th anniversary of the character’s first appearance. In that time the Barsoom series has become one of the most influential works in science fiction history. The number of films, books and games that can be traced back to these stories is beyond measure. Unfortunately, making the film adaptation at this point means that the story is seen by those unfamiliar with the books as more derivative than influential.

The film is Andrew Stanton’s live-action debut, following his success with Finding Nemo and Wall-E while at Pixar. He adapted the screenplay with Mark Andrews, with a re-write by novelist Michael Chabon. For me, it is this screenplay that is one of the flick’s main problems. There is just too much, too soon. While John is the title character, the film actually plays out as two parallel stories – Mr C’s travails intercut with Sab Than of Zodanga trying to take over Helium – which come together only in the last act. The film opens with a big old chunk of Barsoom backstory, accompanied by an infuriatingly confusing narration. It was only as the movie went on that I gradually caught up with the details. I felt a bit dumb for most of the first hour; a feeling that films like this are really not supposed to engender. 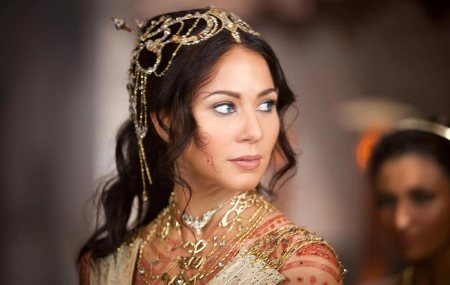 Once it gets going, there is some fun to be had here. The cast are fully committed to the outlandish concept, and Stanton marshalls some decent performances, particularly from Willem Dafoe as Tars Tarkas (despite being Serkised into a 10-feet tall green dude with four arms) and Lynn Collins as Dejah Thoris. Dominic West hams it up with the best of them as Sab Than, although I kept expecting John Doman to appear and call him a gaping asshole. Maybe I’ve just been watching The Wire too much. Taylor Kitsch seems miscast as John though. When he is beardy it looks stuck on, and when he is clean-shaven he looks about 20. I just don’t buy him as an experienced Army officer; he looks more like a high school football player. My shameless scene-stealer award is split between James Purefoy on Mars and Bryan Cranston on Earth, both of whom deserved to have much bigger roles.

I can’t say enough good things about the visuals. The landscapes are gorgeous (including a brief cameo by the Vasquez Rocks) and the animation work is excellent, although considering the film’s $250 million budget I would have expected nothing less. The Tharks in particular are very well realised – both emotive and individual – and John’s “dog” Woola transcends the inevitable Assy McGee comparisons. 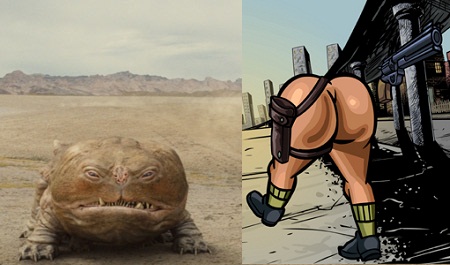 Ultimately the film is just too much like everything else to really resonate. The irony is overwhelming, isn’t it? John Carter is a decent enough way to pass a couple of hours with the family. Although it might be a bit unwieldy at times, there is always another fight or chase or rousing speech just around the corner. And if the flick manages to make some people crack a book too, so much the better.