After last week’s two excellent examples, I’m hoping for another winner for Kids’ Film Friday. Don’t let me down, Dreamworks… 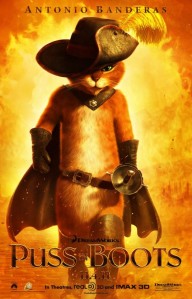 Better than most Shrek movies.

In this Shrek spin-off/prequel, we finally get to see the long-untold story of how Puss got his boots, and his early partnership with Humpty Dumpty while growing up in an orphanage in the town of San Ricardo.

Time to put my hands up to something. I only really enjoyed the first Shrek movie. After that, I found them too indulgent to really work. Based on that impression, I had been reluctant to watch this movie until it was brought to my house and left on the kitchen table. I doubt I would have gone to the effort of getting it myself, but when somebody else does all the hard work for you, there isn’t really much of an argument you can make.

I was surprised how entertaining it actually was. There’s nothing groundbreaking here, either in the story or the animation, but it works. The film’s biggest strength is the casting. Antonio Banderas was born to play this character, and it is always fun to see (or at least hear) him get to stretch his oft-underused comedic chops. The reunion with Salma Hayek as cat burglar Kitty Softpaws is a delight too. These two have a rare chemistry together, going all the way back to Desperado in 1995. The traitorous Humpty is voiced with childlike abandon by Zach Galifianakis, turning a potentially one-note character into something more rounded (no pun intended).

Humpty was convinced his new golden warm-up suit would help him sweat off some of the excess weight.

The story runs along at a fair old clip, with plenty of chase and fight scenes to keep the excitement up, one standout being the dance fight between Puss and Kitty when they first meet. If I have one complaint about Puss in Boots, it is that I wish there had been more obvious input from executive producer Guillermo del Toro. Other than that, there isn’t much to fault here. Combining elements of Westerns, fairy tales and screwball romantic comedies, it’s energetic and funny, with plenty to keep both younger and older kids entertained for a brisk 90 minutes.