The column is a little late again today. I didn’t fall asleep this time though (okay, I did, but only for a short while). Today’s tardiness is the result of falling into a good, old-fashioned Wiki hole. I could have been in there for days just reading up on these two leads.

With the economy failing and the entire country on the brink of collapse, only one man seems like the logical choice in the presidential election: the independent candidate, Lex Luthor. After putting his criminal past behind him, Lex tries to bring the country’s superheroes under government supervision, much to Superman and Batman’s suspicion. As if that wasn’t enough to deal with, a meteoroid made of Kryptonite is discovered on a collision course with Earth. A chunk the size of a city…

This is the second of the DC Animated features I’ve watched in the last couple of weeks and so far they’re two for two. There are some differences between them though. Crisis was a completely stand-alone film whereas Public Enemies is closer to the ongoing DC Animated Universe (though not a part of the official canon), starring familiar voice actors from both Superman and Batman: The Animated Series – Tim Daly as the Big Blue Boy Scout and Kevin Conroy as The Caped Crusader. As an example of how highly regarded the actors are in these roles, they actually get above-the-title billing in the opening credits along with Clancy Brown as Lex. I don’t recall ever seeing that in an animated film before.

This month is actually the 20th anniversary of the premiere episode of Batman: The Animated Series, a show I completely missed during its run. It is now on my list of series to catch up with once this year is done and I have a little free time again. I never heard much about the Superman series though. Is it worth watching too? Tim Daly seems like a solid Supes, injecting some laconic humour into the role; something sorely lacking in all the live-action iterations of the character. As varying in quality as they are, one thing all the movies have had in common is that Superman himself is always so serious as to become predictable, emotionally flat and a little boring. Of course you can blame just about everybody for this, not just the actors involved, but when somebody does something a little differently (as Tim Daly does here) it makes for a refreshing change. 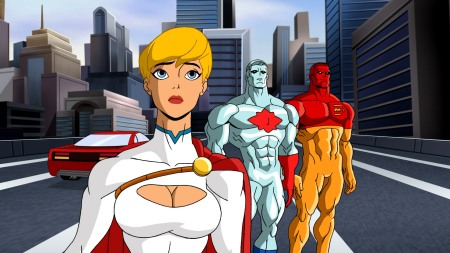 Powergirl, voiced by Allison Mack from Smallville. At first, I thought this might be Chloe (after getting powers from somewhere) (and a boob job)

This new (to me) interpretation of Kal-El is very neatly balanced by Conroy’s stoic yet snarky Batman. The two play off each other very well, almost like an old married couple at times. This relationship is the film’s biggest success for me. It turns the story into more of a buddy-cop movie than an archetypal comic book story.

Of course a superhero story is only as strong as its nemesis, and Clancy Brown adds a great, scheme-tastic Lex Luthor to his resume of baddies. He falls between Hackman Luthor and Spacey Luthor; more believably dangerous (on a large scale) than Hackman, and more dynamic and charismatic than Spacey. His mental degeneration from repentant and respected politician to flat-out psycho is quite subtly handled as well, especially considering the fact that the film only lasts just over an hour, though the Kryptonite steroids bit does come a little too out of nowhere for my taste.

As well as all the fun and interesting character moments, Public Enemies is stuffed with quality fights. There is one particular Battle Royal about half way through after Luthor has put a billion-dollar bounty on the heads of our heroes. Just about every DC supervillain I know (and about a hundred more that I don’t, including a telepathic gorilla!) show up to try to collect. It is scenes like this where the animated features will always outstrip live-action. It is good for the drama to see Superman taking a beating every now and then – something the films have often struggled to bring to the screen.

If you are into these characters at all, and you haven’t yet been swayed by the animated versions, then do yourself a favour and check them out*. There are currently fourteen of these DC Animated flicks. Besides the two I’ve watched for these reviews, I have also seen Green Lantern: First Flight (similar to and better than the live-action movie) and Batman: Gotham Knight (an anthology of several shorts, with mixed results). Batman: Under The Red Hood is currently available on Lovefilm Instant, so look out for that one maybe next Friday.

*I have been warned off Superman: Doomsday by my brother (who is a total Superman fanboy, so it must really be bad for him to say that) but I will probably still end up watching it at some point. Blame my compulsively completist nature.