Today’s flick has been compared favourably to such masterworks as Pan’s Labyrinth and A Tale of Two Sisters, and while I haven’t seen the former yet (I know! I’ll get to it soon, I swear), I can certainly vouch for the latter. 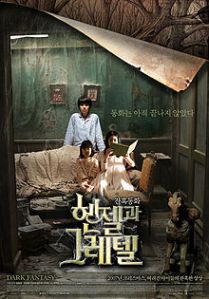 A young man, Eun-soo, is driving to visit his sick mother when his car crashes on the highway through a dense forest. He is found by a girl named Young-hee and taken back to her house deep in the forest. Young-hee and her family tend to his injuries and give him a place to stay for the night, but when Eun-soo tries to leave the next day he discovers that the forest is much easier to get into than to get out of, and Young-hee and her family seem somewhat reluctant to see the back of him.

You might be surprised to learn that the stories of the Brothers Grimm were not originally as “happy ever after” as a lot of the interpretations we grew up with would have you believe. They were not little benign bedtime stories; they were cautionary tales about all the bad things that could happen to you if you didn’t eat your greens or do what you were told. They were, in short, horror stories. Maybe it’s just us though; in non-English-speaking countries, the inherent darkness of fairy stories is more readily acknowledged. And today’s film is no exception.

Hailing – as so many other great pictures do these days – from South Korea, Hansel and Gretel stars Cheon Jeong-myeong as Eun-soo and Shim Eun-kyeong as Young-hee, with Eun Won Jae as her older brother Man-bok. It is a slow burn of a movie that takes its time developing a thorough sense of unease and wrongfulness that gradually permeates every single frame of film over the course of the five days Eun-soo spends at this secluded house in the forest before the he finally discovers the truth about what is happening there and, more importantly, why. Suffice it to say that this is not a straight retelling of the famous story; to say any more would detract from the experience. 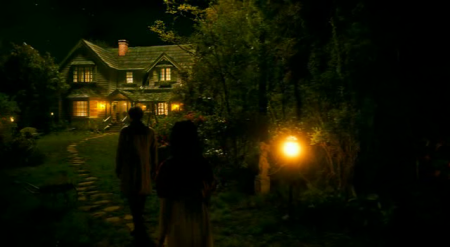 And this is one of the least beautiful shots in the film.

There is no other word for it: this film is haunting. I already know that this is one that is going to stay with me for a long time. Will I want to watch it again? Undoubtedly so, just to experience the performances of the three young leads one more time, Shim in particular. Considering she was only fourteen when the movie was released, it is an astonishing piece of work. It will also be a challenge to try and catch all the little references and homages to various other stories that have been scattered throughout director Yim Pil-sung’s beautiful images.

One thing I am becoming more aware of as this year goes on is that Asian cinema is among the most fearless in the world, and the Korean films I have seen are no exception. This movie is unflinching in its look at some dark corners of the human soul, making it difficult to watch in places. I can’t imagine this getting the sub-par Hollywood remake treatment anytime soon, let’s put it that way.