For The Bible Tells Me So

After opening with an archive clip from 1977 of right-wing activist Anita Bryant getting a pie in the face, this film speaks to five fairly typical Christian, conservative families across the US with a gay child, examining how they reconcile (or not) their love for their child with their religion’s dismissal of homosexuality as “an abomination”.

When I spotted this doc today on Lovefilm, I was honestly expecting a bit of a tirade; ninety-odd minutes of the liberal atheist agenda lambasting Christianity – and organised religion in general – from a position of superiority over those poor deluded church-goers. What I got instead was a reasoned look at the effect having a gay child can have on parents who live with the common interpretation among biblical literalists that being gay is cause for eternal damnation; how it makes them confront failings in their sect’s doctrine (or not) as they continue to love their child regardless of who that child loves (or not).

Not that it matters, or that anyone even really gives a shit, but just so you know where I’m coming from with this review I’m going to state here that I am neither gay nor religious. I have no problem with it though. Some of my best friends are religious, and I am well aware that that’s just a part of they are. If I ever have a son who came up to me one day and told me he loved Jesus, he would still be my son and I wouldn’t try to change him. Unfortunately, not all of the parents featured in this film started off as enlightened as I am. It is important to note that they all (mostly) came round eventually though, albeit just a little too late in one case. 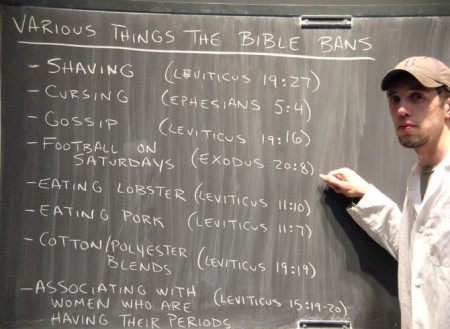 Google found this one for me. It’s not from the movie, though it illustrates one of its main thesis points. Also: funny. From the twitter feed of Corbin Bluford (@followthatcub)

What was probably director/producer Daniel Karslake’s smartest decision about this film was to very neatly side-step any and all “liberal gay atheist agenda” accusations by having all the interviewees be either practising church leaders or prominent religious scholars and senior educators – both Christian and Jewish – including Richard Holloway, former Episcopal Bishop of Edinburgh (my current hometown) and the one and only Archbishop Desmond Tutu himself. Some of the families featured are quite prominent as well, such as the parents of Gene Robinson, America’s first openly gay Anglican Bishop, and Chrissy Gephardt and her father Dick, better known for his 14-year term as the US House of Representatives Democratic Leader.

For The Bible Tells Me So is a much more uplifting film than I was expecting. It does briefly touch on the fight for legal acceptance for gay people in America, but it is more concerned with personal acceptance and the role the church continues to play in denying that basic human right. The film is not without some bite, but that bite is carefully aimed at those whose hypocrisy and selective interpretations of certain verses of scripture (while judiciously ignoring others) continue to promulgate the anti-gay sentiment that remains rife across much of America.