A good advertisement for mental health care in America, and proof that Zach Galifianakis can do more than just variations on Alan.

It’s Kind of a Funny Story

It starts on a bridge.

Craig Kilner is sixteen years old and suicidal. Looking for help, he checks himself in to a psychiatric hospital in New York. During his five days there, made up of therapy sessions and bonding with the other patients, he realises what is important in his life and what he wants to do with the rest of it. Spoiler: He doesn’t kill himself.

Written and directed by Anna Boden and Ryan Fleck (Half Nelson) from Ned Vizzini’s semi-autobiographical novel, It’s Kind of a Funny Story is one of the most straight-forward and realistic portrayals of mental illness I’ve seen in a movie. It still manages to be funny, but never at the expense of the patients or their conditions.

The Justin Long-alike Keir Gilchrist leads the cast as Craig Gilner, a kid who doesn’t even understand the stresses he has put himself under until he just can’t take it any more. His need to meet his father’s academic expectations is certainly relatable to most, and he wanders through the film like a nervous puppy; eager to be liked and prone to vomiting. Emma Roberts (of The Winning Season fame) plays Noelle, a fellow patient whose attention towards Craig helps to bring out his creativity, as well as being the inevitable love interest.

The star of the film is undoubtedly Zach Galifianikis. I haven’t seen a performance quite like this from him in a while. If you only know Zach (and his Beard of Awesome*) from The Hangover and Between Two Ferns then you will likely be pleasantly surprised at the depth and humanity he brings to the mercurial Bobby, a guy who will somehow obtain a set of hospital scrubs to sneak out of the secure unit just to go across the street for a decent cup of coffee. He becomes Craig’s guide to the world inside the hospital, as well as to his life in general.

Screw you guys. I’m going for an ice cream.

Okay, so the cast are all very good and the script is witty and often really funny, but it is also completely predictable. There are no surprises in the film. Craig’s relationship with Noelle can be mapped out as soon as her first scene appears, since it hits every single romantic comedy cliche in the book, with the slight twist that they are both 16 and in a mental hospital. Fleck and Boden’s direction is solid and unshowy for the most part, with the exception of the musical number in the middle where the patients’ group music therapy session turns into a glorious glam-rock dream sequence set to Queen and David Bowie’s Under Pressure. And yes, it is as fantastic as it sounds.

If drama is conflict (which it is – just ask Syd Field) then the second part of this comedy-drama equation is left a bit wanting. I’m not saying the film isn’t serious, but that seriousness seems to come only from the characters (mostly Craig) talking about how stressed out and unhappy they are. The only real conflict in the film is Craig’s own internal one between the stresses of what he believes is expected of him and the release of what he wants for himself. If his father had featured more heavily as a character and as an antagonistic presence in his life, then there would be a more concrete base to build his breakdown on. As it is, Gilner Sr. isn’t mean or a bad father; as portrayed by comedian Jim Gaffigan, he is merely distant and withdrawn. The hospital staff are all shining beacons of decency as well, in the shape of the always wonderful Viola Davis and Jeremy Davies. I realise this is representative of the reality, but is one evil orderly to much to ask for? 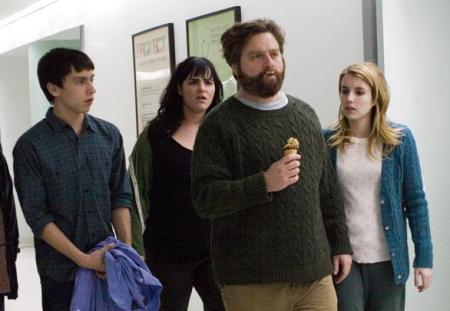 I told you I was going for an ice cream. I gave you the chance to ask for one, but you didn’t take it.

By the end of the flick you will likely be left with a happy expression and some good feelings for the future of these characters, but I can’t helping thinking there was more story to be told here. Maybe I should read the book and get back to you on that.

*Which I have just claimed as the name for my band.