Kris Rennie is a filmmaker, Celtic fan and cinema connoisseur from the wilds of northern Scotland, most famous as the inventor of the “Dimbledance”. You can check out his Boaby if you like. Here’s what he thought about Batman’s latest adventure.

The Dark Knight Rises was a

stunning film on so many levels. It is a modern noir masterpiece, a spectacular epic and a character-driven emotional drama wrapped in one fantastic celebration to cinema itself. This is more than just a mere comic book movie. This is a colossal budget arthouse blockbuster film.

Christopher Nolan and his brother Jonathan, and David Goyer have created a truly wonderful film which not only wraps up the trilogy but also deals with many current topical themes such as the decline of the economy, the impending collapse of Capitalism and the so-called “War on Terror” which blend in beautifully with a story which is essentially about Batman’s fall from Grace and his eventual rise to restore justice, honour and dignity to Gotham City.

Christian Bale probably gives us his greatest performance as Bruce Wayne, both physically and emotionally. He begins this film as a truly tragic and pitiful man, who has been cast out and reviled by Gotham because of the sacrifice he made at the end of the last film. He lives in a world that no longer needs him and which ultimately hates him. His character begins as a skulking, shattered and unrecognisable shell and you genuinely worry about him as the trials that are about to face him in the presence of Bane start to unfold.

Michael Caine really excels in this film as Alfred, every piece of dialogue he has in this film is heart-wrenching because he is Bruce Wayne’s surrogate parent, and you feel his pain and regret from not steering Bruce away from the dangerous and unhappy double life he has been forced to lead. If he doesn’t get a Best Supporting Actor nomination at the Oscars next year then there is no justice at all.

Gary Oldman and Morgan Freeman are also at their best here in their roles in the trilogy. Particularly Gary Oldman, who looks as emotionally impotent and physically powerless to stop his city from being reduced to ashes by Bane and his cronies.

Now, much was said about Bane’s voice, and yes he does sound a bit like an asthmatic Brian Blessed but the hulking presence and the intimidating glances Tom Hardy imbues that character with makes you generally concerned for Batman and Gotham’s inhabitants. He is a force of nature in this film, not just physically but also mentally, as he outsmarts and outmuscles everyone and everything put in front of him.

I don’t really care that he’s “not as good as Heath Ledger” as some people seem to be saying because this story doesn’t need that type of character. The whole point of this film is to show Batman at his lowest ebb and his phoenix-like rise from the ashes, and how he provides Gotham with hope and inspiration again, and the test of his character and spirit put in front of him is an almost immoveable and impossible one in the form of Bane.

Anne Hathaway is perfect casting as Selina Kyle/Catwoman. There wasn’t a moment onscreen where I didn’t believe she couldn’t fit into the world Nolan has created with these Batman films of his, albeit she is used sparingly in the film, but the scenes in which she appears are all a joy to watch. I’d go as far to say that as everyone initially doubted Heath Ledger being cast as The Joker in The Dark Knight, Hathaway knocks it out of the park in her role and she is Catwoman in every single way.

However, I think the stand-out 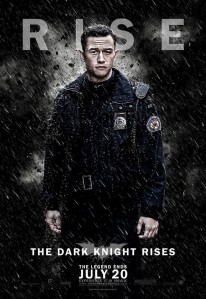 performance by far and whom the film is really built upon is Joseph Gordon-Levitt’s John Blake character. He embodies the spirit of Batman; the tireless and committed man who will strive to care for and protect Gotham, who is inspired to become more than just the ordinary man and who wants Batman to raise that banner again.

The only downside for me was Marion Cotillard, she flits in and out of the film with not much to do other than be a pretty face, but it becomes apparent as the film progresses that her character is an important one in the grand scheme of things. I think the main problem was that she’s essentially a new but peripheral character who provides yet another pretty face for Christian Bale to kiss for most of the film and the impact of her role slightly missed the mark for me.

All in all, it is by far the best film in the trilogy for me. There’s so much to take from this film that it has transcended being just a comic book film, it’s more than that, it’s a fully-realised character drama which one day might be up there with the likes of Taxi Driver, Raging Bull and One Flew Over The Cuckoo’s Nest, it’s an epic and satisfying triumph over adversity in the same way The Shawshank Redemption or Saving Private Ryan was and its last hour is an adrenalin-fuelled ride which makes anything Michael Mann has made in the past look somewhat pantomime.

That’s just my interpretation of it, everyone will have their own take on it but that’s mine. I loved it, and I believe it to be the best film of the year and one which should at least see it receive a Best Picture nomination at the Oscars next year.