This was the first full-up press screening I’ve been at this year, and it’s really no surprise. Frankly I’m amazed I even made it, considering the hangover I woke up with after my four hours’ sleep last night. But that’s a story for another day. Today happens to be Friday, and it’s a kids’ film.

Redheads are awesome, aren’t they?

In the highlands of 10th century Scotland, Princess Merida has been raised by her mother, Queen Elinor, to be a traditional lady, but Merida has a rebellious streak a mile wide and much prefers to be out in the woods shooting arrows. When King Fergus hosts the other clan lords to select Merida’s betrothed, she runs off and stumbles upon a witch who casts a spell to change Merida’s fate. But the spell doesn’t quite turn out the way she hoped it would.

This is Pixar’s thirteenth feature-length animation, and it is the closest they have ever come to he traditional Disney princess blueprint. They come close, but thankfully not too close. Yes, Merida is a princess and yes, there is magic and yes, she (arguably) does have an animal sidekick or two, but they don’t talk and there is no singing, and there is definitely no Prince Charming anywhere to be found. This is a love story but not between a young woman and the man of her dreams; it is about the love between a daughter and her mother.

Merida is a wonderful choice for Pixar’s first female protagonist. She is smart, resourceful, humorous and wilful to a fault. You’ll never find her sitting in a tower waiting to be rescued. This is a young woman who will join a competition to win her own hand in marriage so that she will avoid an unwelcome betrothal. Kelly MacDonald lends her gorgeous and authentic accent for Merida’s voice, and the animators back in Emeryville have done an outstanding job. You’ll probably see some variation of this comment in just about every review of the film, but it’s true: Merida’s hair is practically a character unto itself; an untamed mane of beautiful red curls that bounce around constantly, perfectly matching every movement of her head. 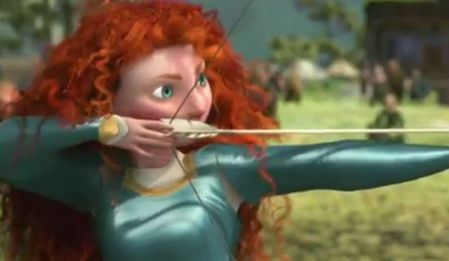 Quite the role model for young girls, I’m sure you’ll agree.

And she’s not the only one. The characters – both human and animal – all look and sound great. Realistic skin still seems to be still a little beyond them (or maybe they’re deliberately holding back in order to avoid the Uncanny Valley effect) but the characters are cartoony enough for it not to matter. As good as the character work is, with the exception of Merida it pales next to the landscapes in which the story takes place. This is scenery porn of the highest order and it is breathtaking. The level of detail is mindblowing and the 3D is deployed beautifully to create this fully immersive world. In fact, there are frequent moments when you would be forgiven for thinking you were watching a VisitScotland tourist board commercial. I was fairly sure Pixar could be relied upon for this, and they’ve done me proud by not Americanising this very Scottish story. Most of the cast are Scots, and those that aren’t still manage to do the accent well enough. This is still a fairy tale of course, so nobody is going to let historical verisimilitude get in the way of the story, but it’s hardly revisionist. Well okay, maybe it is a bit, but certainly not Braveheart level. I’ll ask my historian flatmate for her professional opinion once she’s seen it, just out of curiosity.

The production of Brave was marred by a rather important change in personnel when director and original story writer Brenda Chapman was fired about halfway through. The story was actually quite personal for Chapman, inspired as it was by her own relationship with her daughter. The excuse given was the standard “creative differences” nonsense, and Chapman was replaced by Brad Bird’s protege Mark Andrews. They are both listed as directors in the credits, but you’d need to be an insider to be able to state which elements each worked on, and how different the final movie is to Chapman’s first concept. When you consider that she was Pixar’s first female director, working on their first female-centric flick (and such a personal one to boot), it is a shame that she didn’t get to see it through. I’ll leave it to more well-informed minds than mine to discuss things like gender roles and the implications for the future of women in animation.

Let’s talk about the trailers for this film for a second. They were very good at showing the world in which the story took place and who the lead characters were but they didn’t really give any indication of what the story was. Now this approach does have its benefits but also its drawbacks. On the plus side, I hate it when trailers show too much. I’ve already gone into blackout for The Dark Knight Rises to avoid the possibility of that very thing happening and the trailers for Cabin In The Woods back in April completely ruined the whole surprise of that film. A trailer is supposed to whet your appetite; it’s supposed to make you keen to watch the film, not think you’ve already seen it a month before the release. The downside of this strategy is that when people don’t know what to expect they often end up disappointed. Just look at John Carter – co-written by Brave‘s replacement director Mark Andrews, incidentally – if you doubt that one. The point is, it was a (pardon me) brave decision on Pixar’s part to be so reticent in the advertising, forgetting that the original title when the movie was announced back in 2008 maybe gave the game away a little. In this case, I don’t really see how it would have made much of a difference if they had gone a little more into the plot in the advertising, since what Pixar avoided mentioning occured at most about half-way through the second act. It was far from a last minute twist. For those interested in such historical nuggets, by the way, the movie was announced as The Bear And The Bow.

Anyone for a bun?

Wow, got a little bit sidetracked there didn’t I? Brave deserves to be a hit, and to restore some of the minor disappointment still lingering in the wake of last year’s Cars 2. It is funny, visually dazzling, and led by a welcome addition to the Disney Princess canon. It has a refreshing message about female empowerment that is clearly put across, and is handled with a delicate enough touch to avoid putting off the boys that will come for the fights and the bears. And yes, John Ratzenberger is in there somewhere.

Brave is getting its European Premiere as the Closing Night Gala for this year’s festival tomorrow evening. Tickets are long sold out, but you can still go red-carpet-spotting if you are so inclined. The film is also playing on Sunday morning in the Best Of The Fest. General release in the UK is scheduled for August 17th.