Here are two more movies to add to your options for the weekend (if you’re local) courtesy of your friends at the EIFF. Otherwise, well, you’ll just have to wait. 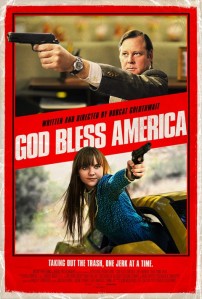 The land of the spree.

Frank is at the end of his rope. Middle-aged and divorced, his daughter hates him and he lives next to the neighbours from hell. After being suddenly fired from his job after a misunderstanding, he is watching television when he realises that the world is in the toilet. We celebrate the vacuous and the inane, prizing fame for its own sake above worth to humanity. Frank is just about to kill himself when he has an epiphany. He’s not the one who deserves to die, they are. He is soon joined by Roxy, the teenaged classmate of his first victim who shares his views and intent, and they commence a cross country killing spree on their way to the epicentre of this modern-day pestilence: the live finale of American Superstarz.

I’m going to go out on a limb here and suggest that Bobcat Goldthwait is not a Republican. I know, it’s just a wacky thought I had after watching this razor-sharp socio-political satire. If you only know Goldthwait from his appearances as Zed in the Police Academy flicks, then this is probably a good place to start. God Bless America is one of his most accessible movies to date as writer-director, bolstered by two excellent lead performances by Joel Murray as Frank and Tara Lynne Barr as Roxy.

Frank’s main motivating factor is what he sees as the end of kindness and consideration for others. This is exemplified by the ongoing saga of Steven Clark, a contestant on the American Superstarz show who sings horribly off-key and appears to be slightly mentally challenged. Steven becomes a laughing stock all over the country, as much for his seeming obliviousness as for his lack of talent. Eventually he is offered a spot singing live on the finale of the series. It is this hypocrisy, this celebration of the inept, that prompts Frank to go. Here’s the big question though: is Steven as gormless as he appears? Is he being used, or is he just as vile and manipulative as all the others that Frank and Roxy have been targetting?

The whole “avenging angel” plot does threaten to tip over into a left-wing tirade at times, but there are a couple of elements that save it. The first is Frank’s own personal politics. He freely admits that he agrees with some things said by the movie’s Bill O’Reilly-ish neo-con tv personality Michael Fuller (but to say any more about that would be to spoil one of the film’s great punchlines) and although most of the pair’s victims would probably line up to the right of centre, Frank never makes any political statement himself. The other saving grace is the fact that the script is balls-out hilarious. It has a perfectly pitched dry wit that both Murray and Barr handle just right, turning these remorseless mass murderers into people we can like and support. 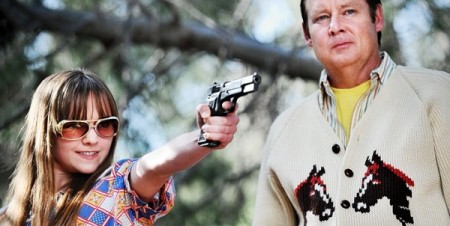 Frank is the nicest person in the whole film. Just check out that cardigan if you don’t believe me.

The scary thing about God Bless America will turn out to be its prescience. The tv and radio clips that Frank is exposed to over the course of the film, the ones that drive him, are designed to be representative of what we have now but taken just slightly further towards absurdity. The problem is that in a few years (if it even takes that long) these clips will seem almost quaint, and then where will we be?

This is one that is worth seeing, and EIFF has the European premiere on Friday night, with Bobcat Goldthwait and Joel Murray stopping by. The second screening is on Saturday afternoon. If you can’t make it to either of those, the full UK release is next Thursday. Yes, that’s right; the Fourth of July. Nice to know someone has a sense of humour.

A man wakes up in a box, with no memory of how he got there. The man’s name is Jeremy Reins and he is an agent of the US Secret Service, and his box is in the boot of a car. Slowly he discovers that he has been taken by terrorists who are carrying out a massive attack on US soil and they want information that only Jeremy possesses. With his family threatened, and with potentially everything he knows about to come to an end, can he figure a way out?

Ah yes, it’s “man in a box” time again. Instead of Ryan Reynolds buried in a coffin in Iraq, here we have Stephen Dorff in a perspex box being driven somewhere between New York and Washington with only a CB radio and a stolen mobile phone for company. Like Buried, the movie is told entirely from Jeremy’s point of view, and Dorff does an excellent job as a man gradually losing it as he begins to doubt everything and everyone he knows. Although, since the actor is a professed claustrophobic (he’s scared of Santa?) maybe he wasn’t doing that much acting…

Sorry to keep harping on about the comparisons, but where Brake has the edge over Buried is the fact that while Reynolds was a passive character – he was just stuck there and had to rely on being found and dug up – Dorff’s Jeremy is an agent of his own freedom. He has the ability to get himself released from the box if he gives up the information the terrorists are after. This adds another element of excitement beyond the basic ticking clock; who long will he hold out? What will it take to make him break?

Will his bladder outlast his determination?

Director Gabe Torres and his production designer John Mott have managed to make the confined location quite a dynamic presence through changing lights and colours, as well as a literal ticking clock in the shape of a massive digital countdown timer. Making the box perspex allows them to shoot from outside while still maintaining the locked-in sensation, and the immediate surroundings of the car trunk help to keep you oriented. Leaving the emergency release latch just beyond Jeremy’s perspex prison was a nice touch of sadism as well.

Unfortunately, all this good work is undone in the final two minutes of the flick, with possibly the most bizarre ending I have seen in quite a while. I don’t want to spoil it for anyone, but suffice it to say that if I had taken the bus home from the screening instead of walking, the driver could have taken that double decker through the gaping hole in the plot opened up by that ending and still had plenty of space on all sides. At first it just raised a “huh?” reaction, but the more I think about it, the more irritated it has made me. It’s a shame because this movie was obviously a bit of a labour of love; in fact both Stephen Dorff and Chyler Leigh (who plays the voice of his estranged wife, Molly) are listed as producers.

Just for one final comparison, the voice of the unnamed 911 operator was played by the same actress in both Brake and Buried – one Kali Rocha. The really sad part is that I actually recognised her voice straight away.

For the first 89 of its 91 minutes, Brake is a very well-crafted film with a strong leading performance, and you can decide about that ending for yourself at the UK Premiere on Friday evening, or again on Saturday lunchtime. As always, you can get more info about the exact screening times and locations, as well as booking your tickets, from the festival’s website.