You may have noticed that I have quite enjoyed all the films I have reviewed at the festival, to one degree or another. Well, today marks my first negative experience at this year’s EIFF, and it is a doozy. 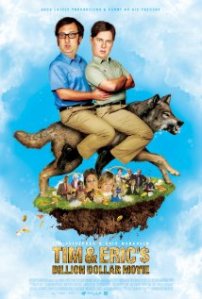 Stay away from this garbage.

Tim and Eric are given a billion dollars by the Schlaaang Corporation to make a movie. When that movie turns out to be three minutes long and awful, Tommy Schlaaang demands his money back. Conveniently, Tim and Eric spot a commercial by a man offering a billion dollars to anyone who will come and take over his almost derelict mall. Seeing this as their only option to avoid being killed by Schlaaang, they make a run for it. Hilarity does not ensue.

Is it me? Am I the problem? Is there something missing in my sense of humour? These are the questions I was asking myself as I endured the seemingly endless (but in fact only 93 minute) running time of this abomination. Watching a film like this makes me weep for the future of the human race.

Tim Heidecker and Eric Wareheim got their start creating the tv series Tim and Eric Awesome Show, Great Job! for Cartoon Network in the US. It was a sketch comedy show with each episode being about eleven minutes. I debated whether to watch any of it in advance of going to see this film, but I decided to go in fresh. Now I’m thinking that if I had watched one or two episodes I might have been spared having to suffer through this. I could have sat in the bathroom pulling out my own toenails with pliers, for example, as that would at least have been more entertaining. Sketch comedy works because it’s quick. You get in, you make the gag, you get the hell out again. It rarely works when expanded to feature length and this is the perfect example of why.

WANTED! For crimes against all the laws of God and man.

Tim and Eric have managed to garner quite a fanbase among the comedy elite in the States; people like Will Ferrell, Zach Galifianakis, John C. Reilly and Will Forte have dropped up as guest stars on their series and do the same here, amongst others like Jeff Goldblum, William Atherton, Ray Wise and the great Robert Loggia. These last names in particular lend the production an air of class that it really does not deserve.

I have seen Tim and Eric’s style described as avant-garde – which I suppose it is, technically – and even anti-humour. Anti-humour (I had to look it up) is when the laugh comes from the irony associated with a deliberately unfunny punchline that is at odds with what you would expect. I like to think I have a fairly well-developed sense of irony, and to my mind, Tim and Eric have got stuck at the “deliberately unfunny” part of the equation. Maybe it’s all just a prank. Some kind of mass social experiment on mob mentality. The world’s biggest bandwagon, perhaps. Or maybe it’s just shit. Let me put it this way: if I had paid to watch this, I would be demanding my money back from Heidecker and Wareheim in person, and at gunpoint.

If you are a devoted member of the cult of Tim and Eric you have quite possibly already seen this, since it has been available in America since the beginning of the year. If not, you can judge for yourself – if you really feel you have to – at the UK Premiere on Thursday night, or the second show on Saturday. 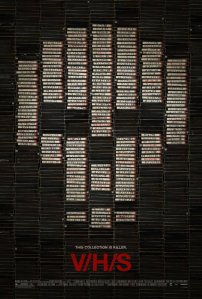 A bunch of guys who record themselves carrying out random acts of vandalism and assault are hired to break into a house and retrieve a specific videotape. What they find in the house is one dead man and hundreds of tapes. Unsure which is the correct one, they start watching some of them. Big mistake.

Now this is an odd one. An anthology of short horror films all based on the found footage gimmick with the framing device of the gang trying to find this one tape out of hundreds, my initial response was one of vague distaste due to the fact that the films seemed to be populated almost entirely by unlikeable idiots. The more I think about it though, the more affecting it has turned out to be.

Each segment has a different director and a different tone, covering everything from monsters to psycho stalkers and haunted houses. There are five separate shorts included, each being one tape watched by the housebreakers. As well as telling a different type of horror story, each film manages to get a slightly different angle on the reason for the constant camera. For example the first film, Amateur Night, has three guys on a night out with less than savoury intentions. In order to capture all the action, the nerdiest of the three has been outfitted with spy glasses that come with a disguised lens in the middle. Another, Tuesday the 17th, starts off as a generic kids in the woods-type slasher affair, only the killer is invisible to the naked eye but can be seen as a glitch in the image through a video camera. I’m hesitating to describe the films in any more detail, as to do so would diminish the visceral reaction that is at the heart of all successful horror. 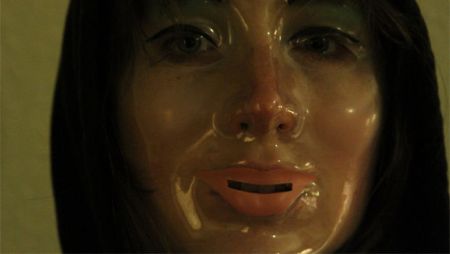 What these films lack in character development (or character differentiation for that matter – some aren’t even named except in the credits) they make up for in short, sharp shocks. These are the campfire stories of the digital age. Of course there are still plot holes here and there, but that’s part of the fun. At just shy of two hours long, it is a bit of a commitment. The film might be more successful if one of the shorts was cut, but I wouldn’t want to pick one to go, and I definitely wouldn’t want to trim the films down. If you are prone to it though, you might want to take a travel-sickness pill before going in. Much like that other great videotape horror – Hideo Nakata’s Ring – this is good on the big screen but would be even better on the small, late at night, alone…

V/H/S is also screening here on Thursday night and again on Saturday. If you can’t get to either of those, it is definitely worth keeping an eye out for.