How have I not seen this before? Why did none of you tell me about this film sooner? You’re all fired. 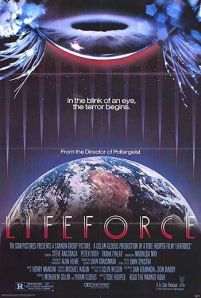 In 1986, as Halley’s comet approaches Earth on its 76 year orbit, a joint USA/Great Britain crew take the space shuttle Churchill to approach and complete a series of experiments. Instead, they find an alien ship within the comet’s coma. On board this ship they find three naked humanoids in suspended animation and bring them back to the Churchill. When it returns to Earth thirty days later, the entire crew is dead. Are these new arrivals as docile as they appear?

This 1985 film was Tobe Hooper’s follow-up to Poltergeist, and the first of his three-picture deal with Golan and Globus’ Cannon Films. The script was adapted from Colin Wilson’s novel The Space Vampires by Don Jakoby and Dan O’Bannon (isn’t it great how his name keeps popping up during sci-fi b-movie week?). I realise this is going to ruin the suspense, but I just want to say right now that I freakin’ love this film. If you were to make a checklist of ingredients that would comprise the perfect sci-fi b-movie, this flick would tick all the boxes. Spaceships? Check. Vampires? Oh yeah. Zombies? That’s a big 10-4. Explosions? Bingo. Hot naked woman? Yes siree, Bob. You know, this may in fact be the greatest film ever made. Of course that doesn’t necessarily mean it’s any good…

Even in the early days of his career, Christian Bale was known for going full-skinny

As I understand it, an early draft of Alien ended with the ship landing on Earth and the beastie getting up to all sorts of hijinks once it passed customs. It’s possible that some of those initial ideas eventually made it to Lifeforce, since the entire plot of Alien takes place during the first ten minutes of this film, right down to the last survivor escaping in a lifepod after rigging their ship to blow. Instead of Ripley however, we get Steve Railsback as Col. Tom Carlsen of the USAF, commander of the Churchill. In an early leading role for him, he’s great as he runs the gamut from a level-headed space explorer to a man driven insane by the psychic link he shares with Mathilda May’s space girl. And yes, that is her character’s name in the credits. Once May escapes from the facility where she is being kept, it is up to Peter (Spooks) Firth to track her down. Why they would bring in an SAS colonel for a job like that I still don’t understand, but maybe that’s why I just review the films instead of writing them myself. Firth handles his “last sane man in London” task with aplomb, giving Col. Caine a laconic sensibility and a refreshing willingness to just believe all the crazy shit that keeps occuring and roll with the developments. My favourite part of the movie in fact is during the second act, where Carlsen and Caine track Space Girl to a psychiatric hospital where she has possessed a patient. The two are accompanied on this trip by the eternally garrulous presence of Aubrey Morris as Sir Percy Heseltine, the Home Secretary! To put that in some context for you, imagine Theresa May MP in a black suit and shades, chasing around New York with Agents J and K. Genius, isn’t it?

While Colin Wilson’s original novel was set in London, I like that the filmmakers chose to retain that setting. To me, it gives the movie echoes of that classic from a few years prior, An American Werewolf In London; one increasingly erratic American surrounded by a lots of serious men with stiff upper lips and the most delightful Received Pronunciation accents. You just don’t hear people talk like that in the movies anymore, but it makes even the most ridiculous (as written) dialogue sound perfectly normal and totally believable. This was what the BBC did right back in the early days of broadcasting when everyone on air had to speak in RP: no matter what the news was, you believed it because that accent has in inherent ring of truth to it. And then into this wackiness you toss the hand grenade that is Mathilda May. The then-twenty year old French actress has a striking resemblance to Alyssa Milano and is naked for just about every scene she appears in. Let me just say this: it is no wonder every male character she interacts with falls in love with her, even if you discount her psychic influence. 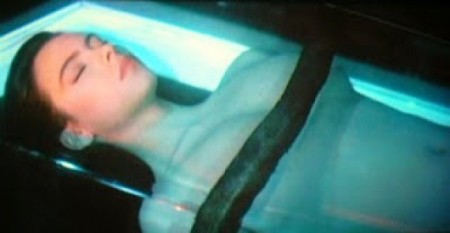 This is the least naked picture of her I could find. Seriously.

This film was Cannon’s attempt to break away from their expoitation roots, and they assembled quite an impressive crew to help them. Hooper’s direction is a bit more restrained than it was when he shot that powertool incident down in the Lone Star State, but this helps to ground the story in a more everyday normality. Oscar-winner John Dykstra led the visual effects team. While the “stolen souls” effect looks a bit cheesy now, his work on the spaceship miniatures still holds up very well. One of the senior guys in the practical special effects crew was a certain Chris Corbould, now better known as one of Christopher Nolan’s key collaborators. The final act, where the zombies have overrun London, is really fantastic. The scope of it is huge; pretty much the entire city is burning, and the hordes are everywhere. The zombie makeup in the climax is suitably gory, although it is clear the makeup team was working from a pattern to save time, since a lot of them have the same wounds in the same places. The camera doesn’t linger though, so the effect is hardly jarring unless you were deliberately looking closely. The score by Henry Mancini is wonderfully bombastic and heavy on the horns, reminscent of both John Williams’ Star Wars cues and Stu Phillips’ Battlestar Galactica theme.

“Tell me, Patrick Stewart. I have to know… DID YOU EVER HAVE HAIR?!”

Of course there are one or two things in the film that just don’t sit right. Some of the attitudes towards the female characters are a bit, eh, shall we say old-fashioned? And there is one particular scene where Carlsen and Caine are interrogating one of Space Girl’s psychic hosts – long story – that is downright unsettling to watch. It is also exceedingly convenient that our heroes have Frank Finlay’s Dr Hans Fallada watching their backs. This noted scientist is not only an expert on these newly discovered creatures, he is also able to get his hands on the one thing that will kill them at a moment’s notice. On the plus side though, he is just hugely entertaining to watch.

Lifeforce wasn’t the success Golan and Globus were banking on back in 85, but if you are a fan of this type of flick you could do a lot worse than to check it out.