Holy crap! Day 150! Another minor landmark on this road to complete insomnia I am currently embarking on. On a side note, tomorrow is the release of the programme for this year’s Edinburgh Film Festival. Since it will be taking place around the corner from my house, I will be reporting daily from the Fest itself which kicks off in just under three weeks. Until then, I’m going to start looking into some of the bigger and lesser known flicks that will be playing and maybe previewing some of the ones I really want to check out. But first, let’s get this out of the way. 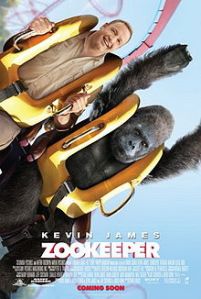 Griffin, the top zookeeper at the Franklin Park Zoo, was dumped by the woman he loved just as he was proposing to her. Five years later, she makes a surprise reappearance in his life. He’s desperate to get her back but has no idea how. Luckily for him, all the animals in the zoo can talk, and they take it upon themselves to help him out. But will he get who he wants? Or will he finally realise that the one he really wants to be with has been right in front of him the whole time? Apathy ensues.

Comedy films are supposed to be funny, right? I mean consistently funny, throughout the entire running time of the movie? What do you call a film that is marketed as a comedy but only makes you laugh once? Would that be a drama? Horror? How about “shit”? Yes, I think I’ll call it “shit”. Good god, this is awful. Do you know who I feel sorry for? Rosario Dawson. There are only three people who make this film anything more than outright garbage, in fact. Rosario is one of them. She’s basically playing the same character as she did in Clerks 2: the stealthily wonderful-in-every-way colleague that the leading schlub convinces to help in his romantic schemes, only for him to realise at the end that she’s the one he ought to be with. She even gets another dance scene! Admittedly this one isn’t as awesome as Kevin Smith’s rooftop-cum-flashmob moment though. Dawson makes a sinfully underwritten character into a thoroughly likable person with nothing more than her own natural charisma. That smile doesn’t hurt either.

The other two are Alec Gillis and Tom Woodruff Jr from Amalgamated Dynamics, Inc. These two have been responsible for so many movie creatures over the last 20-odd years you wouldn’t even believe it. If Stan Winston or Rick Baker didn’t do it, chances are these guys did. They have done all the Xenomorphs since Aliens, for one thing. As well as designing and building all these effects, Woodruff often pulls double-duty as the guy in the suit. For Zookeeper, ADI created all of the animatronic animals, and Woodruff also played Bernie the gorilla. It was a nice moment for someone like me who always reads all the credits on a movie to see Woodruff get his own title card amongst the leading cast members at the end of this flick, instead of being buried way down past the dolly grips and best boys. Actually, now that I mentioned Bernie, let me add Nick Nolte to the list of people who save this from the bottom of the cinematic slagheap. He is perfectly cast as the voice of this animal, resigned to a lonely existence in a hole of an enclosure, who gets a new lease on life after being taken out to TGI Friday’s (in some of the most hideous product placement in recent memory) by Griffin. If you’re the one person wondering how a zookeeper takes a gorilla to a popular chain restaurant for ribs and cocktails, let me explain: they put a t-shirt on him and say they’ve come from a costume party. In fairness, the fact that Bernie talks like Nick Nolte probably helps sell this cock and bull story a lot better than the t-shirt does.

There’s really no other way to say it, but this is a bad film. It fails as a comedy because it’s not funny. It fails as a romance because it adheres so strictly to every cliché that you can write the ending before the film even starts. It’s too grown up to work for young kids (other than the first “ooh, talking animals” moment) but it’s too childish to work for adults. If you haven’t seen it, don’t bother. If you have, I feel your pain.