That time again, friends. I figured I would take a break from the recent spate of martial arts and filth here on WTF Sunday and take a trip back down Sexploitation Boulevard. Would you care to join me? 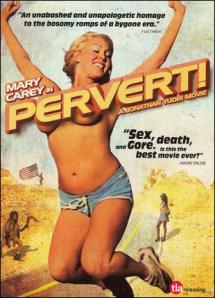 The cock of the walk

Pervert! is first-time director Jonathan Yudis bowing at the feet of the master of the big-boobed comedies, Mr Russ Meyer. Is he a worthy successor? Honestly, it’s been so long since I watched a Russ Meyer flick that I’m really not the man to ask. This film is an absolute riot though. The star of the show is the delightful Mary Carey, taking a break from a career starring in such hits as New Wave Hookers 7 and Lesbian Big Boob Bangeroo 2. The one-time California gubernatorial candidate* is wonderful as Old Man Hezekiah’s new girlfriend. Even when she is lying in a hammock next to her sleeping paramour while his son is on the ground underneath rear-ending her, she has such a likeable innocence. Darrell Sandeen (Buzz Meeks in LA Confidential) plays Hezekiah, James’ bible-thumping, moderately deranged pa, who has taken to sculpture since his wife died in, uh, mysterious circumstances. His art is certainly unique, but to say any more would spoil the surprise.

Can anything I say top what you’re thinking right now? I doubt it.

Sean Andrews as James and Juliette Clark as Hezekiah’s nurse Patty are saddled with most of the dramatic heavy lifting and acquit themselves well enough, especially in the increasingly gonzo third act where the identity of the killer is revealed as [I would normally bring in The Cap’n for a spoiler warning at this point, but this is too much fun not to share] James’ own penis, which detaches from his body while he sleeps and runs around on its own committing sexy murder. This killer cock is brought to life by stop-motion animation and takes on quite the personality, especially after Hezekiah befriends it. A lot of the other effects are (hopefully) deliberately bad, such as the rattlesnake that menaces James at one point which is clearly stuffed and being manoeuvred by someone just out of frame. All this adds to the film’s charm – for want of a better word – if you’re willing to go along for the ride.

After One-Eyed Monster, this is the second detachable killer cock flick I’ve seen. While that Ron Jeremy vehicle had a bit more money to spend on needless CG special effects – not to mention apparent delusions of being a mainstream film – Pervert! is my choice for the better movie. Yudis is fully aware of what film he is making and who he is making it for. He is clearly doing this for the fun of it; a fun that is oddly infectious. The man himself also puts in an appearance as the local mechanic who is determined to give James the full service when all he needs is a new tyre. Business must be pretty slow out in the ass-end of nowhere.

Well somebody looks a bit pissed off. Geddit? I crack myself up.

This flick is a comedy first and a horror second, but if you’re looking for scares then you’ve come to the wrong place. Like last year’s epic eighties throwback Hobo With A Shotgun, Pervert! succeeds as a tribute to the era it emulates because it embraces that genre wholeheartedly without any sense of a knowing wink. Yudis and his entire cast and crew have come together and made a movie to stand with those of Russ Meyer, not to poke fun at them.

*Seriously. She came tenth out of 133 candidates in the 2003 recall election that some other actor eventually won. His name currently escapes me.