It’s Sunday again, which means it’s time for some good old batshit insanity. This week, unlike some of the other trash I’ve featured here, I have one that actually became a bit of an indie darling when it premiered at Sundance back in 2007. 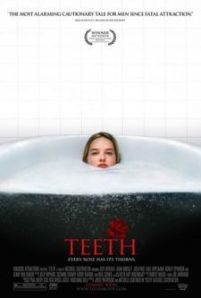 I want some steel condoms

Dawn is a teenager who is mocked daily in high school for her involvement with a sexual abstinence group called The Promise. When one of her friends in the group tries to rape her, she finds out she has a way of fighting back. Much crossing of legs ensues.

Believe it or not this flick is actually a comedy, though of the blackest kind imaginable. Jess Weixler is fantastic in the lead role as a girl initially fearful of the very idea of her sexuality, then actually scared shitless of the damage she has done, before coming to terms with her “power” and using it deliberately at the end. Everyone else in the film is one shade of asshole or another, with the exception of Dawn’s gravely ill mother and her loving stepfather played by Lenny Von Dohlen. Unfortunately, every time he appeared on screen I started hearing that “Together in Electric Dreams” song. Damn you, Giorgio Moroder.

A lot of the comedy comes from the less-than-subtle symbolism scattered through the film, such as a close-up of an open knot hole in a tree when Dawn and Tobey are going swimming together. I’m not sure how much if this in particular was intentional, but it certainly gave me a giggle. This isn’t the type of film to be peppered with jokes, but there are some situations you will be laughing fairly consistently at – particularly Dawn’s response to one of the later chomps – when you are not squirming in your seat. One moment stands out as comedy gold though: the comment by the surgeon about to attempt a reattachment for one of Dawn’s victims.

The film’s second – and much more playful – poster could be more than a little misleading.

Despite the laughs and the gory close-ups, there are a few really uncomfortable tonal shifts in the film. Remember that this poor girl is sexually assaulted three separate times by three different people over the course of the running time. She does get her ‘revenge’ on all of them, true, but those scenes are not pleasant to watch. Writer/director Mitchell Lichtenstein’s depiction of teenage boys as all either happy-clappy religious zealots or rapists-in-waiting (or both) is not exactly fair either, although it does add to a kind of sub-John Waters exploitation feel. Honestly, without Jess Weixler in the lead, this movie could have really unlikeable. As it is, Lichtenstein seems to forget the point he is trying to make about burgeoning female sexuality and empowerment after the first hour. By the end of the film, Dawn is not the hero. She’s the monster, vengeful and wilfully destructive. The nearest thing to a hero in Teeth is her stepfather, who from frame one is shown as welcoming Dawn into his family with no ulterior motive, while ultimately excluding his own violent, drug-taking son. 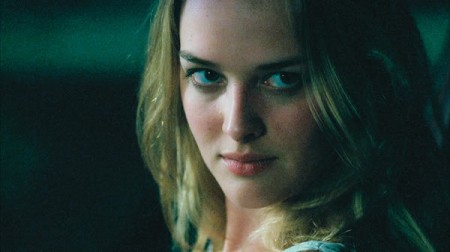 At this point, I’d start running.

Overall I suppose I did enjoy it to a certain degree, and I was watching it with my female roommate who seemed to appreciate it too. Heed this warning though: Teeth is not a date flick.