Well shit: day 61. That means I am now exactly one-sixth of the way through this recklessness. Honestly I didn’t think I’d even get this far. Thanks for reading, everybody, and for all your comments and support here and on the book of faces. Okay, that’s enough of the soppy crap. Let’s get back to the big words and snark.

Two brothers, Stephen and Bloom, have grown up as grifters. Spying an opportunity for a massive payday, Stephen convinces his younger brother that they should target the reclusive heiress Penelope Stamp for their ‘last big score’. According to the plan, Penelope soon falls for Bloom, but are his feelings for her real or just part of the con?

Have you seen Brick? If the answer to that question is yes, you are now officially my friend. Welcome to my world. If the answer is no, then you had better go and remedy that situation as soon as humanly possible. You can wait until after you’ve read the rest of this review though. Brick was Rian Johnson’s debut film back in 2005 that took a typically convoluted noir story and dumped it in an LA high school. It was criminally underseen but has cemented its place in my all-time top 20* thanks to its dizzying dialogue and career-making central turn by Joseph Gordon-Levitt. As much as I love Brick and will seize any opportunity to go on about it to anyone who’ll listen, it is not today’s movie. That honour belongs to Johnson’s follow-up feature: The Brothers Bloom – a romantic comedy/drama/caper/revenge flick with echoes of Charade and Jules et Jim. I loved it.

As with any film that features deception as a major theme, to say too much about the events that occur would be beyond heinous so the Cap’n can stand down. Go play with your parrot, old man [Yarrrgh!]. Suffice it to say that the brothers have shared a symbiotic and profitable relationship since they were young, when Stephen discovered that the terminally shy Bloom would come out of his shell if given a character to play. It just so happens that these characters have always been in service of a scheme. After twenty-five years of this, Bloom comes to the conclusion that everything he is has been thought up by Stephen; he doesn’t have any sense of who he is outside of their cons. So he does what any self-respecting thirtysomething does in that situation. He runs off to Montenegro for three months, only to be drawn back in by his big bro.

I was listening to Stevie Wonder singing "Isn't she lovely" ten minutes ago. Yeah Stevie, she is.

Adrien Brody really plays up this existential crisis mixed with more than a little ennui convincingly, but of the four leads he is probably the least compelling (though I suppose that fits with the whole ‘empty vessel’ nature of the character). Mark Ruffalo is a whirl of energy as the manipulative but not malicious Stephen. I’ve been a fan of his since I first saw him in that Robert Redford flick The Last Castle back in 2001, and it’s great to see him finally get a shot at the big time as Banner/Hulk in Joss Whedon’s Avengers (out next month, kids) after years of being the best thing in so many indies and shitty rom-coms. Rachel Weisz delicately avoids the pitfalls of the ‘manic pixie dream girl’ trope thanks to Johnson’s unique script, and she is an absolute riot as the sheltered rich girl with the abundance of solitary hobbies who knows she is being conned pretty much from the start, but plays along anyway just to keep some excitement in her life. I dare you not to fall at least a little bit in love with her. But in a movie full of cons and thieves, one person steals the whole thing with just three words and a detonator: Bang Bang – played by Rinko Kikuchi (incidentally, one of only two Japanese actors to be Oscar-nominated, and the only one currently alive) – the brothers’ selectively silent sidekick and demolitions expert.

She can blow me away any day (wink wink). Oh god, I'm ashamed of myself just for typing that.

There are those who say that The Brothers Bloom is all style and no substance, that the film itself is as much of an empty vessel as Bloom. They certainly have an argument to make, but I disagree. You get as much out of this flick as you are willing to put in. It is very stylised, almost to a Wes Anderson degree, and the magic-realism tone of the piece can put people off. It has a timelessness about it as well: the costumes wouldn’t look out of place in a Truffaut movie; the team play shuffleboard on a steam ship; it’s all very 1960s but when Penelope comes racing down the road in a brand new Lamborghini (it might have been a Lamborghini – I’m no expert) you’re suddenly jarred back to the present day. The flick feels untethered from time in a way that I haven’t seen in years, if at all. Personally I dug it. I loved the dreamlike quality of it all, but I can understand where the detractors are coming from. I don’t want to say any more about it for fear of hinting at any of the secrets within, but if you even slightly want to check this flick out I urge you to give in to that feeling. This would be a good snuggle-on-the-sofa movie actually, after a nice home-cooked meal and a bottle of wine. 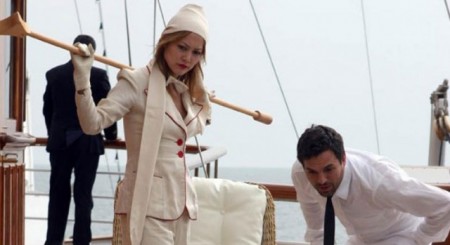 "What's that, a strike?" "I dunno. Nobody under the age of 90 actually knows how to play this game."

*I keep mentioning this mythical list, don’t I? I’ll publish the complete version at some point. Maybe.