And so we move from one extreme to the other. After yesterday I needed to watch something as light and fluffy as humanly possible. This seemed to fit the bill.

Julie Powell is a frustrated writer working in a cubicle in New York in 2002. Struggling to find something meaningful in her life, her husband suggests she try blogging. Between them, they come up with the idea that she will cook every one of the 524 recipes in Julia Child’s seminal book Mastering the Art of French Cooking, and she’ll do it in one year*. Meanwhile, we also get to see the story of Julia writing the book itself as she follows her husband Paul through a series of diplomatic postings throughout Europe.

(As any of my Facebook friends will probably jump to attest, today I am technically cheating. I had intended to watch this flick today, but I really needed to get yesterday’s taste out of my mouth as quickly as possible, so my roommate Iida and I watched this on Lovefilm last night. If it helps, I feel bad about it.)

After movies, my next great love is food. Not just eating it though; I love to cook and I’m actually pretty handy in the kitchen as well. Knowing this, it should come as no surprise to hear that films featuring food tend to rate quite high with me. Big Night and Eat Drink Man Woman are old perennials in my top 20 list. This flick won’t be challenging those heavy hitters, but it is a pleasant enough distraction that is completely owned by Meryl Streep as Julia Child. 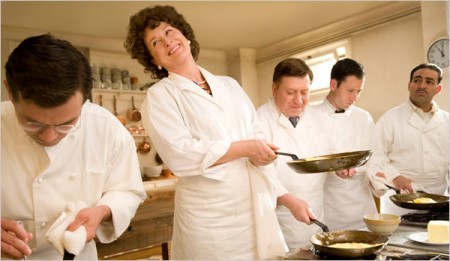 "Mon dieu! Qu' est que ce le crazy tall American madame!" (I don't even know if that makes sense, but it's about all the French I can come up with besides merde and un biere s'il vous plait.)

Now, I’m 31 years old and from Northern Ireland. Those two facts together mean that I was never really aware of Julia Child until this movie came out. When I was growing up we had Delia Smith as the TV cook (I even missed Fanny Craddock entirely. Praise His Noodley Appendage for classic TV repeats) but of course these days you can’t spit without hitting a chef with his own show. Most of them have the charm of an angry gerbil with a dose of the clap but there are a few that I do like to watch. Where was I? Oh yeah. I’m not the guy to ask how accurate Streep’s recreation of Child is (though knowing her it’s probably a fair to middling effort) but as a character she is wonderful: flighty and fun and delightfully vulgar and wickedly intelligent, but with a sadness inside her. The scene where she receives a letter from her sister bearing the news that there’s a baby on the way is heart-breaking. It’s not stated outright exactly why Julia and Paul don’t have children, but it doesn’t need to be; their reaction to this news is enough.

The original caption for this photo at RopeOfSilicon.com was "Stanley Tucci and Meryl Streep: the only two reasons to watch Julie & Julia." Can't argue with that.

If there was an Oscar for Best Husband, Stanley Tucci would have run away with it. Paul Child is almost saintly in his devotion to and tolerance of his strong-willed wife, and matches her quip for quip. It is to Tucci’s credit that he never makes the man seem like a doormat. The two actors were obviously having a blast working with each other again and this chemistry is all over the screen. Their scenes together are by far my favourite part of the movie. I just really want to be hanging out in Paris with these two (and I don’t even like Paris). 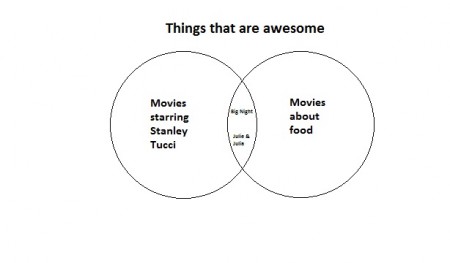 The Venn diagram says this film should be awesome. I made this myself, by the way, just in case that wasn't obvious.

What I don’t want to do is hang out in New York with Julie Powell, or at least the Julie Powell of movie-land (although I really quite like New York). Amy Adams does her best despite a shocking haircut, but even my mad crush on her cannot disguise the fact that Julie is really not a very likable person. Her frequent “meltdowns” only serve to point out that she’s taking this shit far too seriously. The project becomes an obsession that takes over her life and almost costs her both her actual job and her marriage. That won’t happen to me though; I’m not married and I don’t have a life. 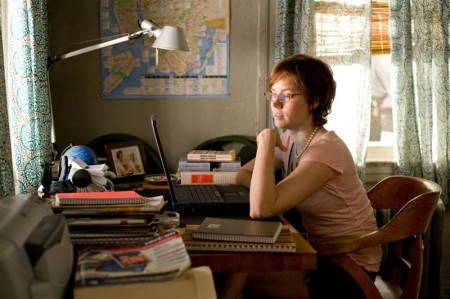 She even has a photo of Julia and Paul on her desk. Is that the sign of a crazy obsessive, or a dilligent art director?

Nora Ephron’s decision to combine the two women’s stories into one film is I think a good one. Julie herself couldn’t hold up a whole movie, and contrasting Julia with the adventures of her young acolyte only makes you want to see more of Julia, which is exactly what all good movies should do. I don’t score the films I watch, but if I did, this would get 3 stars; 4½ for the Julia and Paul parts minus ½ for the annoying Julie, and minus 1 star for the constant use of the word “blog”. I know it’s what I’m doing here, but I just fucking hate that word. It sounds like the noise a dog makes when it vomits. A bit more screen time for Mary Lynn Rajskub might have got it back up to 3½ though or even 4. Yes, you guessed it: I fancy Chloe.

*Blogging about doing something every day for a year? What kind of dumb idea is that? Oh, wait…