I AM IN A WHOLE OTHER COUNTRY TODAY! That’s right; this is the first international edition of 5-Word Movie Reviews, coming to you live from the Emerald Isle. My nieces say hi. 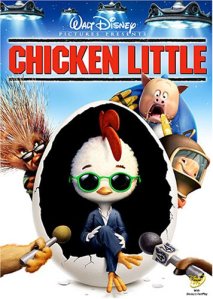 Did someone spike my booze?

A little chicken thinks the sky is falling, and tries to convince his father and the town that he’s not a crazy liar. Sounds like a fairly straightforward tale, right? And it is, for the first 40 minutes or so. Then things go all kinds of crazy, to the point where I had to check that I wasn’t hallucinating. It’s total lunacy, but it’s fun lunacy. And that is pretty much this whole film in a nutshell.

The old fable of Chicken Little is pretty slim by all accounts. I didn’t really know it before today, so I had to ask Wikipedia. What the writers Mark Dindal and Mark Kennedy have done is to take that basic framework and hang a real story on it (although I would not be surprised to hear there was some herbal assistance in the first writing sessions). It is no longer an acorn falling on our hero’s head. Now it is really a piece of the sky. Or at least a piece of the cloaking shield designed to disguise the alien spaceship hovering over town. And this is the point where I started to worry for my sanity. Out of the blue (pardon the pun) a relatively standard Disney family cartoon becomes an end of the world flick! As wild genre shifts go, it’s up there with From Dusk Till Dawn. 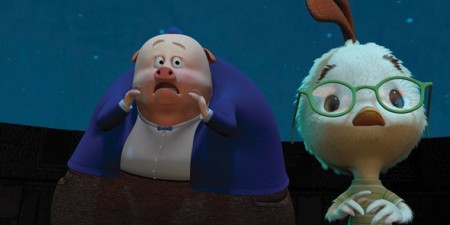 Movies like this are made for kids, not critics. The kid in me really enjoyed this. It’s bright, colourful, fun and has a lot of sweet little character moments among the sight gags and quips. Not to mention the refreshing unpredictability. The cast are a solid bunch of well-known names. Zach Braff plays Chicken Little with the same flush of innocence and naivety he trademarked during his 8 years at Sacred Heart Hospital, and Joan Cusack is her usual winning self as his best friend Abby. And I’m surprised Garry Marshall managed to tear himself away from another of his recent spate of trite, Hallmark Holiday, ensemble snooze-fests long enough to appear as our hero’s father Buck. Plus, it’s awesome to have Patrick Stewart and Adam West in the same movie.

You all make sure you go see my next movie: Easter Monday!

Looking at this through a jaded and cynical critic’s eyes however, and there are problems. At first all the references and in-jokes seem cute, but even at less than 80 minutes, they get a bit tiresome. Speaking of which, opening up the running time might not have hurt any, considering the amount of stuff being packed in here. Overall, it is an enjoyable enough way to pass an hour or so. The sheer balls of the story helps immeasurably on that score. If you have kids, and they haven’t already seen this a hundred times, give it a whirl.