Special thanks go out to Charlotte from the office today, for a loan of this week’s WTF Sunday DVD. This is another Takashi Miike masterpiece that has been on my radar for quite a few years and I’m glad I finally got around to it.

Sweet Jesus, not the tongue.

Trust me, that will make sense. This movie has been built up so much as the holy grail of horrific movies but to be honest, it was hardly in a league of its own. I’ve seen a lot worse in films made both before and after. While the violence was arguably necessary in the context of these characters, I think there a lot of people who would really have got a lot out of the story but have been put off by the imagery.

Ichi is actually a bit of a supporting role in his own movie. The main protagonist is Kakihara (he’s the blond with the scarred face on the artwork), a Yakuza who’s boss Anjo has disappeared with all of the gang’s money. Kakihara is on the hunt for Anjo and eventually discovers that the man has probably been killed by someone called Ichi. Kakihara is a true sadomasochist who needs to inflict pain as much as he needs to receive it. The only person who could hurt him to his satisfaction was Anjo, which is why he needs to find him. As Ichi kills off more and more of the gang in ever more dramatic and messy ways, Kakihara starts to believe Ichi is the one he needs. Maybe Ichi is the only one violent enough to kill him? 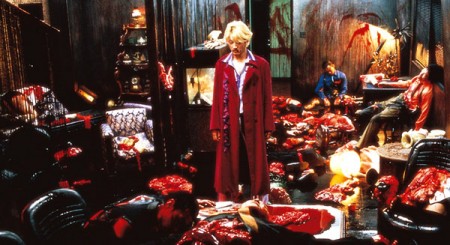 The unrated version of Yellow Pages' "Morning After" ad was only ever shown in Japan.

This film is disturbing, that is true enough, but it wasn’t the frankly cartoonish bloodshed that bothered me; it was the depths of despair these characters go to – and actively seek out in several cases – that had more of an effect on me. The sexual proclivities and hang-ups, and the pervasive sexual violence as well, are what made this such an uncomfortable watch. The most (only?) sympathetic person in the film is Kaneko, one of Anjo’s bodyguards. He is a former police officer who was sacked from the force after losing his gun. It seems working for the Yakuza is the best job he can get as a single father with a less than stellar employment history. That’s the beauty of this film though: while you may not like them, and in fact are probably even repulsed by them, Miike and the writers Hideo Yamamoto (who wrote the original manga) and Sakichi Sato have made every single character in this world a fully-fledged person. A whole movie could be made around Kaneko, for example, without very much more in the way of character development.

When it comes to filmmaking technique, this is an astonishing piece of work. During the climactic rooftop fight sequence there is a bravura speed-ramping shot for example, five whole years before Zack Snyder’s 300 popularised the idea to the point of saturation. When I called the gore cartoonish, I meant in terms of scale. The execution is excellently done though, with a mostly seamless blend of practical and CG work. From listening to Bey Logan’s typically effusive and well-informed commentary, I was actually surprised by how much of the blood was computer generated. There is not one duff note among the cast either. I have to single out Tadanobu Asano (Kakihara) and former Miss Singapore Alien Sun, who played Karen, the frankly twisted sort-of girlfriend of the Yakuza man. Asano isn’t even recognisable from his latest role as Hogun, one of Thor‘s Warriors Three, and by some miracle he manages to make this psychotic lunatic someone that you almost root for, while Karen is the most cryptic character in the flick. Switching languages mid-sentence between Japanese, Cantonese and English, you don’t even know where she’s from, never mind what her ultimate motivations are.

Don't they make a cute couple though?

Miike has left the ending of the film deliberately mysterious. There is no clear answer given to the question of how much of what happened really did happen. It is left up to you to decide for yourself, much like the decision of whether to watch this in the first place. For me, I am glad I did.