Best Mistake I Ever Made

A great thing about film festivals is getting to see a flick you might otherwise miss, whether because it won’t get a release, or it’s not your usual kind of thing, or because your mates wouldn’t like it and you’re too much of a pussy to go and see a film by yourself. An even better thing about film festivals is The Accidental Find. A film that you come across without even realising it; a film that then becomes one of the highlights of the whole event. So it was with me and Weekender. I saw this movie for one reason: I can’t read basic signage.

I had slept late that morning so I had to double-time it down to the Edinburgh Filmhouse to see Troubadours (a documentary about LA singer-songwriters of the 60s and 70s – James Taylor and Carol King and so on). Troubadours was showing in screen 2. I wandered in to screen 1 and made myself comfortable. I didn’t even realise I had fucked up until the opening credits. Now I wasn’t in LA in the seventies, but I’m pretty sure there wasn’t a whole lot of banging house music upsetting the neighbours. Luckily for Weekender, I have a long-standing rule that I will never walk out of a movie. Also, in this case, luckily for me.* 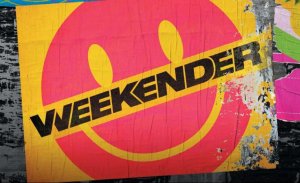 Weekender tells the tale of Matt and Dylan; a pair of Manchester lads in their early twenties who we first see pulling the old “your fag machine needs replaced” gag in a backstreet pub (which leads to the best Naked Fat Guy scene since M.C. Gainey let it all hang out in Sideways). They’re chancers, but there is a charming sweetness to them; they’re obviously not bad guys. It turns out they need the change from the machine to pay the door charge at a rave that night in Blackburn. It is at this party where the boys announce to their friends their plan to host their own rave. It is, of course, a success and Matt and Dylan soon become the hottest promoters in the North East, eventually attracting attention both welcome – such as London-based promoter Gary Mac – and unwelcome, in the shape of local hardnut John “The Rat”.

This is not a new story, but it is told with such energy and exuberance that you can’t help but get swept up in it. Jack O’Connell as the impish and impulsive Dylan, and Henry Lloyd-Hughes as the more pragmatic Matt make for engaging leads. They have an easy chemistry together, and you can completely buy the fact that these guys have known each other forever. Director Karl Golden surrounds them with a cast of mostly unknowns, but there are no bum notes. At times you feel you could be watching a documentary as opposed to a work of fiction.

And then there’s the music. Oh, the music. Time for a brief autobiographical interlude: I was 10 years old at the time this story takes place (1990). There was a bit of a rave scene in Belfast in the nineties, but nothing on the scale of what is portrayed here. Even if there had been, it would have held no interest for me. The resident tape in my walkman in those days was Please Hammer Don’t Hurt ‘Em. Even now, I don’t like dance music. But here’s the thing: there will be a 3-cd compilation of music from “and inspired by” (ugh) the flick released on the same day as the movie itself, and I may actually buy it.

As you might expect for a movie about the rave scene, the music is a constant presence throughout. The brains behind the soundtrack is DJ Terry Farley. He was one of the leading lights of the London scene back in the early nineties and played at tons of raves just like those shown here. When asked to provide some tunes (chooooooooons!) for the movie, he just opened up his record boxes and called some mates to do the same. The result is a soundtrack that is at once evocative of an era, and a mood, and a lifestyle. It sets the tone while never seeming dated, at least to my admittedly mostly-ignorant ears. It also fits each scene perfectly. Everything starts out bright and uplifting, but when shit starts approaching fan for Matt and Dylan, the music takes a noticeable turn to the dark side. This kind of thing should go without saying, and with a traditionally-scored film it probably would, but it is a very tricky balancing act when filmmakers are using a cut-and-paste soundtrack of existing stuff. Even more so when the story is tied so specifically to a period in time.

Weekender had its World Premiere at this year’s Edinburgh Film Festival, and will be released across the UK on 2 September.